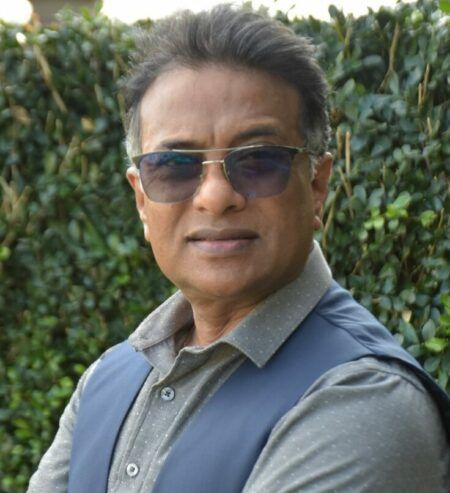 “People should be able to assist a debate being led by a woman and give due regard to potentiality and meritocracy irrespective of gender.”

Rama Ersapah is currently a Lecturer in Marketing and Management at Middlesex University and is a member of the political party ‘Reform Party’. He has known Gender Links since many years. His official encounter was in September 2021, at the launch of the 50/50 campaign (Rezone) which aims to advance gender equality and youth participation in politics. Furthermore, he attended training sessions on ‘Women and Youth in Politics’ and appreciated the exchanges and open-minded approach adopted during the training.

Ersapah’s rich literary journey began at a young age when he became part of a literary club which organized various literary activities for example, ‘Disco-Forum’ (debates on songs), ‘Des Chiffres et des Lettres’ (Numbers and Letters). He then started to write poems in Mauritian Creole, taking inspiration from Dev Virahsawmy, amongst others prominent authors. Involvement in these activities has personally shaped Ersapah’s interests and personality. He then became the President of the Committee of his hometown where inhabitants came together to work for the betterment of their locality.  He underlined the fact that he was not born with a golden spoon and has carved his path in life with hard work and determination without forgetting his roots.

Some illustrations of his various creative streaks and modest contributions to the world of writing include his translation of a poem of the famous French poet and screenwriter Jacques Prevert in Creole and the song ‘Linite’ (meaning ‘Unity’) that he wrote for the Independence Day of Mauritius in March 2021. He recently gave an interview on the radio program ‘Dimanche Culture’ where he talked his newly edited book, I Rise 2021.

Ersapah’s affiliation with the non-governmental organization (NGO) Global Rainbow Foundation (which aims to serve the most vulnerable groups especially persons with different types of disabilities), began when he was entrusted the task of editing a couple of articles. Thereafter he became the coordinator and editor of the ‘I Rise 2021’ edition, a book which compiles the inspiring stories of 21 people living with disabilities. He recently submitted a Masterplan (2021-2030) for the NGO which was presented to the European Union on the occasion of the tenth anniversary of the NGO.  He believes that one should always have a plan B, even a plan C to avoid roadblocks. When asked about the challenges he faced during his journey, Ersapah asserts that a combination of perseverance, persistence and a positive attitude is important to surmount challenges in one’s path.

In addition, Ersapah also organized sales training programmes.  Notably, the recruitment process did not discriminate based on gender, locality or academic background. People were given the chance to prove themselves and unlock their potential. The individuals hailed from communities where people looked down upon them; yet equipped with proper training, they became successful. These programmes yielded a great sense of personal satisfaction and fulfilment for Ersapah as the individuals were motivated to reach their full potential.

Ersapah emphasizes that parents play an important role in modelling healthy behaviours to their children.  He is a firm believer in setting SMART goals (specific, measurable, achievable, realistic, and timely) and being humble enough to ask for help or delegate. With regards to the qualities that a leader should have, Ersapah explains that a leader should be able to plan (absence of a plan leads to failure), then lead, organize and control (not dictator type of control nor laissez-faire). He further stated that his involvement in politics stemmed from a longstanding stigmatization of his locality which fuelled his desire to bring constructive changes within his community first and ultimately at a national level. With regards to gender equality, Ersapah claims that people should be able to assist a debate being led by a woman and give due regards to potentiality and meritocracy irrespective of gender.

In terms of his future plans, Ersapah intends to undertake his duties diligently as the newly proclaimed Director of Sales, Marketing and Publications at the Global Rainbow Foundation on a pro bono basis. In a bid to continuously support people with disabilities (PWDs), he will also channel a project on hydrotherapy. Having been a candidate in previous elections, Ersapah aims to be elected for the upcoming Municipal elections and also at national elections. Besides his involvement in politics and social work, Ersapah wants to make his locality a model smart town which includes environmental protection strategies. He further iterated that if people were roped in environment friendly initiatives such as roof gardening, this will simultaneously help to combat social scourges.