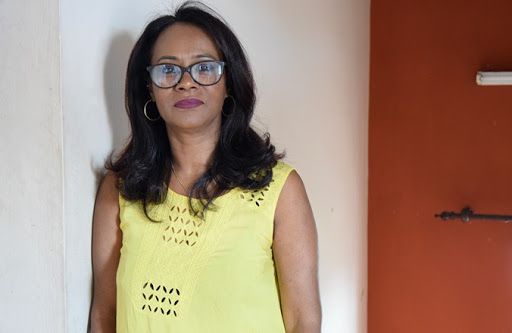 “You are not only the messenger. You are the message.”

Bignoux explained how she had previously been a victim of violence. Today, after rigorous work with her partner, she has been able to come out of this. She explained her poor familial background and her journey in politics.

Bignoux presented her experience under the Drivers of Change category as the only female Councillor in the District Council of Savanne. She described her journey as a ‘femme battante’ – ‘a woman who have been through a lot in her life and yet is standing firm today’.
She aims to fight against vices of society such as domestic violence and drug abuse. She believes that it is important to work towards changing the mind-set of people regarding gender stereotypes.

She is a social worker who has worked with children, women and men. She has organised workshops around the theme of domestic violence.

Initially, she encountered difficulties while working with men who were reluctant to be part of the dialogue on domestic violence.

Priscilla Bignoux has been offering training courses to women. Her life motto is “Nou kapav” (“We can”).

Her workshops brought significant change in the lives of people. Men and women are both sharing household chores.
Priscilla Bignoux has not only changed the lives of other people but has also brought change in her own life. Her husband is now a changed man who supports her in her endeavours.

She has been able to initiate a dialogue between men and women as a Councillor (from 2012 till 2020). Her project with young teenage mothers and the NGO ‘Groupement Social de Souillac’ which she created is a proof of her hard work.

She is continuously working in the south region, Souillac, to raise awareness among the survivors of GBV. She is also developing an extensive educational programme and training for the survivors of Gender Based violence. She plans to continue working with both men and women.