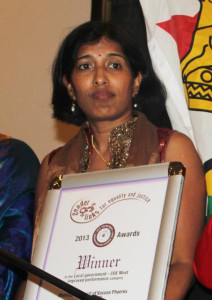 “It is a girl’s dream coming true”

I first met Gender Links in a workshop sometime in 2006 or 2007 and since then my perspective of looking at things changed drastically even though since my early childhood I was always fighting in my own ways the disparity between boys and girls. My Mother who attended school up to only the primary level has always guided me and one thing always remain in my mind: In the Hindu Culture girls get married and leave their parental home to live with their husband family. My mother has done all the best possible to educate me as she said “neither your parents home is neither yours nor that of your husband.” The first thing that will happen when there is a problem, your husband and in laws will tell you “leave and go away to your mothers place”.

When you are back your brothers will be aghast and will treat you badly since they fear that when you are back and you will become a hurdle to their life. The best thing when you are educated is that you are economically independent and do not depend on others to live your life. There cannot be gender equality without education and economic independence.

It is not having only increasing number of women in local politics that counts it is also the way they participate and overcome their fear and dare to voice out and participate equally at the decision making process. As most of the women in Council are new to politics they get embarrassed and do not have the experience as their male counterpart and this should be taken care of.

To be a driver of change a person needs to be motivated and believe in the gender equality, the change in fact begins with that person then he/she can transmit that to others. In 2013 I participated in the competition for the best improved performance for the Municipal Council of Vacoas Phoenix and won the first prize in South Africa among all the SADC Countries.

During the national summit I presented two projects one on environment and the other in the Centre of Excellence category. During my presentation for the environment category I was really very taken aback as the project was not prepared to the required standards and other staff members as compared to the COE category that I had prepared myself prepared it. During the presentation I came to know that though a lot has been done in this category by my Council yet same has not been presented the way it ought to have been.

At Indaba Hotel, in April 2013 during the award ceremony we were really proud that Mauritius was winning so many awards for the good work done. The Award ceremony was almost over and I was not hearing the name of my organisation I was disappointed since I knew that My Council had done a lot. Then Suddenly I heard Ruby Saying “There is Council which has done a tremendous job in mainstreaming gender equality and has almost quadrupled its marking….” At that particular time I was moving my head all around to see who could have been the winner and could not believe that it was My Council. This was the most wonderful time in my life. It is not only about winning it is also about how you have contributed for a just cause. GENDER EQUALITY YES WE CAN- YES WE MUST. This logo always rings in my ears.

My husband has always been supportive and in fact when I was leaving for SA, he encouraged and motivated me. A change in mindset is important and it is what this award has brought for me. Looking at things differently with a gender sensitive eye. My Daughter already knows a lot about gender equality and parity.