Drivers of Change Mauritius – “There is a leader in each of ... 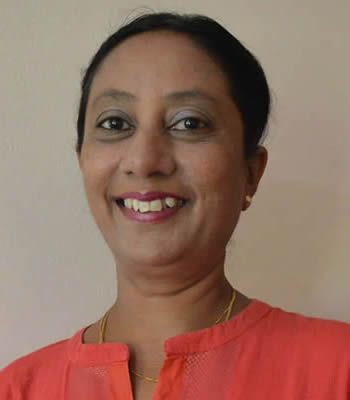 Sita Saminaden is the Director of Stephen Business School in Mauritius and is a member of the political party ‘Rassemblement Mauricien’. Her first encounter with Gender Links occurred in 2021 when she attended training sessions on ‘Women and Youth in Politics’.

Education and Childhood: Self belief
Despite her humble beginnings, childhood sickness and stereotypes around girls’, Sita defied many odds. After completing her primary education with flying colours, she attended the Queen Elizabeth college (QEC) which was a game-changing moment for her. She was then offered a scholarship to pursue her studies in Management (Specialization in International Marketing) at the University of Mauritius. She was very interested in communication and has obtained a rich and diverse experience in the print and electronic media networks. During her work experience, more opportunities were offered to her male colleagues. Whilst she had her pregnancy, childbirth and even following childbirth, her career did not move. Nevertheless, Sita challenged herself and continued to show her discipline, resilience and commitment.

Achievements: a dream come true as she pays tribute to her husband
In 2017, she became one of the very few female entrepreneurs in the tertiary education sector and created Stephen Business School with the encouragement of one of her former female colleagues. Sita therefore believes that women should put the crown back on each other’s heads. Despite being in a male dominated field of work, Sita has also been able to counter prevalent stereotypical images of a female director. Sita underlined that being a female entrepreneur is challenging – she faced ageism, sexism and social stigma. Nonetheless, she wishes to encourage women to listen to their dreams and be acknowledged for their ideas.

At Stephen Business School, Sita ensures that students’ academic education is accompanied with soft skills and personality development. Furthermore, having established her school, she has provided employment and benefitted individuals at an individual, family and community level.

Besides the creation of her school, Sita has been actively training young people on entrepreneurship, with the aim of making them independent and encouraging creativity and strategic decision-making.

Politics: Harnessing the human capital
Sita realised a few years back that she had to get involved in active politics to bring fundamental change. She knows that politics lead to decision making. She commits to try her level best to construct a better Mauritius for future generations and to ensure sustainability.

Future plans: A dedicated campus
In terms of her future plans, Sita wants to have her own university campus and make use of different pedagogical tools at her school. Furthermore, she intends to conduct a course on ‘Financial literacy’, primarily aimed at potential female entrepreneurs, free of charge, to support women to develop a business plan and ensure the sustainability of their enterprises. Secondly, Sita wishes to establish a non-governmental organisation in the name of her late husband which will focus on education and women’s financial independence, especially to provide a framework for women to reflect on their business and lives.

Personality traits: Be bold and self-confident
Throughout her path, Sita has always gotten out of her comfort zone. She wants to increase the representation of women in politics and influence decision-making. By so doing, Sita also asserts that women should mobilise, choose their political ideology wisely, communicate effectively and surpass their self-imposed limitations. Women simply need to be given the space to express themselves.