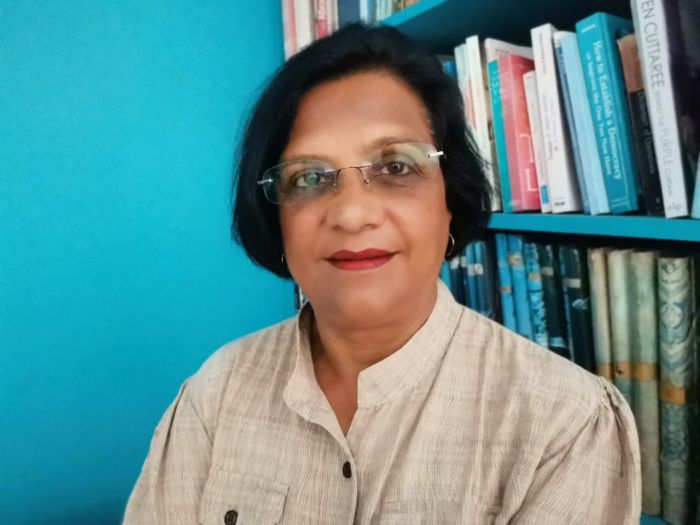 “One should know how to use one’s knowledge to the benefit of the people.”

Neena Ramdenee’s first encounters with Gender Links occurred more than ten years back through Loga Virahsawmy, Gender Links Board Member and Media Consultant and thereafter Anushka Virahsawmy, Country Director of Gender Links Mauritius. She attended presentations and most recently participated in the ‘Women and Youth in Politics’ training sessions organized by Gender Links Mauritius. She appreciated that young people were included and given the opportunity to speak during the training. Ramdenee highlights that young people need to understand firstly why they are joining a particular political party and whether they adhere to the ideology.

Ramdenee is the secretary of the political party ‘Movement Patriotique(MP)’created in the year 2015. Within her political party, female members are courageous, far-sighted and greater in number. Had men experienced the same barriers to participation in politics as women, Ramdenee affirms that they would have given up. She highlights that men are given more opportunities and support in our society to achieve their goals.

Ramdenee is still touched by the words of her father who told her on the day she was leaving for higher studies (higher studies was rare at that time as girls were normally married at 18 years old): “Ramdenee, I consider you as my son and you are given the same rights”. Her father allowed her to study abroad and she made the most of it. Ramdenee recognizes that her mother has been a driving force as her mother herself was a social worker in the public sector and was driving her car to attend duty in almost every part of Mauritius. Education rather than instruction plays a major role behind Ramdenee’s fearlessness and she credits her wide knowledge to the exposure she received at Loreto convent secondary school and her father’s constant references to the teachings of Swami Vivekananda.

Ramdenee holds a Doctor in Pharmacy from University Louis Pasteur, Strasbourg, France. Following her six-year long studies, she then worked in a Pharmacy in France and her two children were born there. She then returned to Mauritius in 1985 and subsequently moved to La Réunion where she stayed for 20 years. At La Réunion, Ramdenee set up and worked in her own pharmacy and shouldered the entire responsibility, in a fair and ethical manner. Upon her return to Mauritius in 2006, she did a Master’s in Business Administration (MBA) International Paris and was the first batch of postgraduate students. The MBA has enabled her to adapt, create a network of people (from diverse walks of life) beyond her family and obtain a theoretical perspective on the subject.

Furthermore, Ramdenee is the President of the Society for Aid to Children Inoperable in Mauritius (SACIM), a non-governmental organization (NGO) in existence since 1967. The vision of SACIM is to allow operated children to lead a normal life and thus SACIM provides facilities for children, aged between zero to 18 years, to undergo surgeries. 773 children have been operated and some, several times but unfortunately many children are not diagnosed at the right time, thereby preventing them from undergoing timely surgeries. SACIM children are taken care of by doctors and nurses all the way till death. Ramdenee asserts that it remains the duty of the State to take care of the citizens of Mauritius.  NGOs are not in competition with the government but they are complementary. SACIM has several success stories of operated children who are doctors, lawyers, sportsmen and the latest young woman who had scoliosis, was successfully treated and is today a pilot in South Africa. Ramdenee is also addressing the lack of visibility of SACIM, one of the issues currently facing the NGO.

In addition, Ramdenee gave lessons in a program set up by the Rotary Club of Port Louis to children from underprivileged backgrounds on hygiene and grooming, basic manners and respect. She realized that despite attending the formal education system, the children did not have basic literacy and numeracy at the age of nine. Consequently, Ramdenee points to the weaknesses in the current education and health sectors as the welfare state remains solely an appellation. Besides, fathers were not interested in the progress of their children or the lessons as they saw it as a ‘woman’s thing’.

Although Ramdenee deems it natural for babies to look out for their mother (for instance, breastfeeding), this does not imply that fathers do not have any responsibility. Supportive fathers and spouses ensure that women get respite and can focus on their growth and goals following childbirth. Men should also realize the sacrifices and responsibilities that paternity leaves involve.

In terms of her involvement in politics, Ramdenee’s father had been a candidate at elections twice and her uncle was the Mauritian ambassador in the United States of America (USA). Initially, she subscribed to the political party of her father but then realized that she did not have much knowledge about her own country. Ramdenee believes that the wheel exists and one should learn how to adapt to it. She further notes that it is normal that the government of the day employs people whom they know and appreciate but these persons should have the appropriate experience and competency. Ramdenee is even more determined to do politics ever since she started doing social work. While doing social work, she claims that one can only abide by the laws which are not always fair and appropriate. To change the laws, one has to be involved in politics and be active in parliament to give his or her input. Especially in relation to SACIM, Ramdenee’s vision involves allowing children to have the maximum chance to go abroad for their surgeries and expenses should be shouldered by the Ministry of Health. It is to be noted that SACIM’s constitution has been changed and surgeries which cannot be done in public hospitals now can be done in private clinics in Mauritius. SACIM has financed ten operations locally in 2021.

Undoubtedly, Ramdenee wants to change something fundamental in the lives of women, children and in the society. Parity between men and women matters most to her and she believes that women are more powerful than men as women can multitask, are organized and generally logical in what they do. Parents, teachers and social-cultural organizations have a prominent role to play in teaching civic education, basic manners, life skills, compassion and empathy (we do not learn these values but rather these need to be accentuated in us). This is because everything boils down to the right education. When it comes to violence, Ramdenee believes that men who are perpetrators require the support of specialized governmental institutions for instance, groups like ‘AA: Alcooliques Anonymes’(Alcoholics Anonymous). These groups are important to understand the causes of violence collectively and to allow perpetrators to express themselves.

Ramdenee does not deem herself a follower; rather she wants to understand things and keeps her goals in mind. Indeed, she has a vision of what she wants to do for her country and the citizens of Mauritius as she unfortunately witnesses a lot of people suffering due to misgovernance and lack of foresightedness.