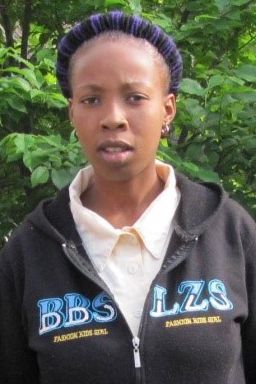 “I worked very hard and I was able to pay myself at the end of the month, buy food and pay my children’s school fees”

She cannot forget the first time she encountered Gender Links (GL) and they wrote their stories and she explained that the exercise was very refreshing and made her realise that life was still worth living as she had given up on life.

Her name is Mookho Taleng, a very young single mother who has five children at the age of 25. Mookho lives in Thabana Morena in the district of Mafeteng and she mentioned that she is the youngest person who attended the entrepreneurship programme at their council. When she first joined this programme she was uncomfortable because she realised that she was the youngest and had so many children and all the women there were old enough to be her mother. She wanted to quit the whole thing, but her councillor Neo convinced her to stay and give the project a chance.

Mookho was raped at a very young age and that person impregnated her, she was devastated because she was very young and both her parents had already passed on. That incident messed up her life so much as she had to drop out of school and look after her child. She had to look for a job so that she could look after her child and it was not easy and that is when she met so many young men who would sleep with her and promise to take care of her, but they never did, instead they gave her four more children. When she realised that her life was very difficult she started selling traditional beer and the business was not going well as she did not have business skills.

Her life was very difficult, so much so that she could not afford to pay her children’s school fees. After she attended the three phases of entrepreneurship training she was taught how to draw up her business plan and did her personal development indicating where she wanted to see herself in a given time, she was able to change few things in her life. She admits that it was difficult, but she wanted to change her life and make a difference in her children’s lives.

Since she lives in a very rural area and had always been aware of things that they struggle to obtain in her village, she saw an opportunity, but she did not have capital to start her small business, although she was confident due to all the training she had attended. She did not use the money that she was given for transport reimbursement, as she walked all those kilometres and saved up that cash to start a business. Taleng was able to save R640 for transport and she made a decision that she was going to buy something that would definitely assist her in starting her business.

After she realised that she had collected so much and only wanted to use it to start her small business, she went to town to buy paraffin and sell it in small amounts. She mentioned that the business was really doing well and was able to make money and she used it to buy more stock. She worked very hard to see that her small business succeeded and she decided to prepare and sell more traditional beer which she was selling before the workshops. She highlighted the fact that she did not have business skills but due to the GL training she was able to put everything that she learnt into practice such as budgeting and bookkeeping. She worked very hard and she was able to pay herself at the end of the month, buy food and pay her children’s school fees.

Since she grew up without parents, her life had not been an easy one, but GL training helped her so much as she had given up on life and she was able to gain back her confidence. She had lost faith in men and that affected her relationship with her baby boy as it was a constant reminder of the men she had met in her life, but she learnt to love her child and not to associate him with men as he was a child and did not know anything, nor was it his fault that his mother had experienced such terrible things. She mentioned that if it was not for GL she does not think she would be where she is today and she would like to thank GL for giving her hope and helping her to change her life. She did not think at any time that she would use a computer, even just to touch. When she saw computers she had it in her mind that only rich people use computers, but GL was able to change that mind set and she touched a computer. Sometimes, when she is in town, she goes to the internet shop and just plays around with it and she enjoys the feeling.

She mentioned that she would not have done all these things if it was not for her councillor, Neo, who has always been on her side and encouraged her. When asked, Cllr Neo Mahase added that Taleng is a strong and dedicated young woman who has so many children, but is working hard to see that she takes care of all of them. Cllr Mahase mentioned that Taleng is not the only one who has benefited in the village, but she has influenced other young women, especially the ones who had children at a very young age like her. She is trying to show them that having a child at a very young age is not the end of the world.

She has made peace with what happened to her and has decided to forgive all men that have hurt her and she is working closely with some men as they are her reliable customers. She intends to change her life for the better and is not willing to allow anything to confuse her. She wants to take her business to town when it has grown as there she will be able to cater for many people.