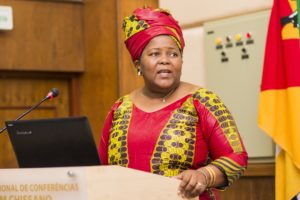 “In one way or another some English words we pick up at Gender Links regional summits and meetings end up being part of our vocabulary and, without noticing it, we use them even in meetings where the official language is Portuguese.”

I was attending my party conference when I had to speak to the policies of different parties and the extent to which they need to consider increasing the number of women within the electoral system to ensure that women make up a party quota of 50%, in this way ensuring that there is gender parity. In my explanation I said that this meant that political parties must use the fifty/fifty (50/50) campaign, by saying that I used the word in English to give it more emphasis.

I was congratulated on my intervention by all participants, especially by the women who used to be the majority of the party meetings, to the extent that from that day besides the issue of pushing for the party quota to be a priority for the agenda, I was also called Miss Fifty/Fifty from that day.

This is to say that the work and the partnership between Gender Links and the Council of Mandlakazi has not only helped to support the council to organise itself, train women and men within the council on leadership, economic empowerment and other subjects. It has also helped the council, the district and even the province to move forward in mainstreaming gender within its programmes and projects.

Being a woman who always fought for my rights and the rights of many women and children from my community, in 1997 I created an organisation called MUCHEFA (Association of Families Headed by Women). This was after the war in Mozambique and the objective was to revive in women the spirit of unity and remind them that life must continue no matter the 16 years of war the country had gone through and all the leaders who were lost at that time. This role ensured that I was popular in my community. As a result of this popularity and my commitment, I was elected Mayor of the Mandlakazi Municipality in 2008.

While I was running the association, Gender Links brought a wonderful partnership. This partnership provided three significant forces in my life as a women, mother, leader and mayor of the Mandlakazi Municipality.

The first encounter with GL was in 2011 at the Cardoso Hotel in Maputo, the second in Johannesburg during the regional summit in 2013 and the third one this year at the VIP hotel where the Mandlakazi Municipality worked very hard. As a result of the hard work, the municipality was rewarded with awards in three categories, 50/50, Gender Based Violence and the Most Improved Council.

At Gender Links the councillors and gender focal point persons have learned different ways to integrate gender within the council programmes. They have learned planning, design and action planning skills as well as organising community training on gender and local government.

Through Gender Links the way of approaching gender issues has changed. As the Mayor, I had improved my planning and increased my understanding on the intersection between gender and local government.

The change in my life had influenced the change in people surrounding me and those with whom I work. Although I must recognise that there have been changes in attitude in my community and party, I would like to emphasise that I still face some challenges in moving the gender agenda forward. We need to join efforts to fight the barriers that are embedded within the cultural systems in which we live.

Therefore, I will continue working with my community and through my party to push the agenda forward especially the party quota, and I will continue engaging with Gender Links to provide me with expertise, knowledge and strategies to move this agenda through the SADC Protocol @ Work. Thank you Gender Links”