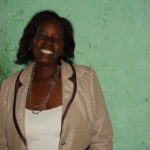 “The key to success is lost without knowledge.”

Saima Shivolo, a resident of Oshikuku, originally from Umbalanhu village in the Omusati region, is a married woman for 3 years and a mother of 6 kids plus 4 other kids that are under her care. Although she is employed as a police officer, her monthly income could not sustain her monthly expenses like taking care of the children, paying their school fees and making sure there is bread on the table. Thus she opened a restaurant in Oshikuku to feed her community members and the visitors, for she saw the need of cooked food lacking in her area.

She started her business in 2009 from the money she received from her mother as a gift. Her restaurant offers different types of food, snacks and refreshments; porridge, rice, chicken, meat, fish, chips, fat cake, eggs, and at times she sells uncooked fish, chicken and raw meat for the ones that wants to go cook at home. Saima says that her business was facing hardship in the areas of management ranging from her customers, employee, and financial aspects of the business. Her personal life was also in hardship as her husband used to abuse her physically and mentally.  This caused the business to suffer losses, but after she received training from Gender Links she came to realise that once a person’s personal life is going well then the business will start catching up. She say that now her business is picking up speed because of the knowledge she obtained from Gender Links on how to run her own business successfully. Although the violence and abuse activities are still present in her personal life, she says the level of it has dropped with an approximately 80 percentage.

She is now a proud owner of T Restaurant with 2 employees, as she give credit to Gender Links for she only had one employee before receiving the training but after the training she hired another staff. She is happy for making a difference in other people’s life for many of her community member continue to seek for advice regarding business and personal life.

Saima obtained a certificate from Genderlinks as an entrepreneur and her journey in Gender Links is increasing for she was given an opportunity to travel beyond the Oshikuku borders to meet potential people that motivated her to continue being a business women, and connect her to potential suppliers and customers that are needed for the growth of the business. She also got the opportunity to go spend time at places that are very expensive to go due to the lack of finance like in Windhoek during the summit.

She believes that an educated women hardly experience violence and abuse, because, from experience, she got enlightened on how to avoid being abused in her personal life and how to run your business successfully. Her life has changed at a fast rate and she believes in educating and empowering a women as one of the ways to reduce violence and abuse, especially educating a women as the most important one. Her mind is now open and she has a vision of a brighter future of opening other restaurant in other towns, and even embarking on business journeys that are mainly embarked by men.

Saima is a driver of change because not only does she influence and inspire other women in her community to strive to depend upon themselves but man and the young generations are also inspired by her. At times she arrange small meetings at her restaurant teaching others that are facing the same challenges she was facing in her life, for she believes that one day she will open a vocational school where she will be teaching, motivating, and inspiring other women to become self-dependent.

There are some challenges that Saima’s business faces; drank customers insulting her and asking why she is not selling alcohol so that they can enjoy their meal while drinking, and a lack of customers resulting in food standing for too long causing her to through the food away.

Saima has a certificate to conduct business in the Oshikuku town that she received from the Oshikuku town council, in 2030 she hopes to be a very successful business women running her business not only in Oshikuku but in different towns too. The plan is to hire more staff to reduce poverty and unemployment rate in her community and in Namibia.

Saima says she is strangling to get financial help to grow her business into a bigger one so that she can branch it out. She feels like the training she received from Gender Links is not enough. More or different types of training should be introduced. Thus will help more women to be enlightened and be at the same level as men. She believes that the key to success is lost without knowledge

She gives credits to the Gender Links team that were involved in all workshop held in the Oshikuku town for a job well done.