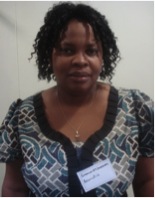 My experience with Gender Links is short and fruitful. I came to know about it in 2013 when we received a request to be part of this successful programme. Ruacana Town Council committed itself and has never looked back since then.Gender mainstreaming is our focus and we have developed strategic partnerships and networking opportunities across different sectors. We signed twinning agreements with three local authorities (Rundu, Nkurenkuru and Eenhana) in order to learn best practices and replicate them in our Council through Gender Links. We created platforms were we discussed various issues affecting our communities, how best we could deal and solve those issues. Furthermore, the focus was also on local economic development, staff exchange, tourism and infrastructure development. In addition, evidence of progress in gender mainstreaming in service delivery at our Council is the order of the day. We have indeed changed people’s lives and improved their living conditions.

Apart being a female CEO, it has been challenging amongst my fellow male colleagues as we are only 7 female CEOs among 49 males in the country. Not only did I have to proof myself to my fellow colleagues, but I also had to proof it to the community we are serving and the country at large. I spearheaded various community meetings where we discussed various issues pertaining development and how we as a Council could assist them (community) in improving their lives. Since the proclamation of the town, we realized that people were resistant to change and did not really understand the reason for a town council. We decided to recruit Grade 10 and 12 school dropouts and we trained them for 2 weeks at our offices. We taught them regarding basic issues such as the reason for the existing of Council, the

services we provide and also their responsibility as community members to honour their obligations and pay for services provided. These learners then had a door-to-door campaign in the community were they informed them on these vital issues. This exercise we repeat each year in order to bring others who might have migrated to our town on par with the others and have the same understanding.

It took approximately 3 years for the community members to really understand and start responding positively which we appreciate as the authority in place. The response and support is overwhelming. We further extended our education / civic campaign to the Traditional Authorities because part of the town was in the jurisdiction of the Traditional Authority. They were also resistant at the beginning because they simply felt that we (as a Council) are denying them of their rights and are taking over their responsibilities. However, after several meetings between the Town Council and the Traditional Council, an understanding was reached and cooperation is evident.

SMEs in our town received basic financial management training from various training institutions in order for them to improve the way they do business, we managed to invite the Development Bank of Namibia for a presentation to share more information on how SMEs can apply and acquire for loans to start or expand their businesses.

Having looked at our community and other towns as well as the world at large, we knew how people were faced with many challenges in the informal settlements, whereby in other countries it is referred to slums. As a Council we decided to change the situation and lobbied for funds from Central Government, where we formalized our areas, namely Omonawatjihozu and Okondeka. Gravel roads were constructed, water, sewer and electricity services have been provided as well. We went a step further and constructed individual toilets for each plot (180) just to improve the sanitation problem.

My first encounter was after Council committed itself (on 26 June 2013) to be a roll out Centre of Excellence for Gender Mainstreaming. On 29 July 2013, we (management) had a meeting with a Gender Links official (Ms. Beverly Mpho Slinger) in Ruacana. I learned a lot from my first encounter as I did not know much about Gender links’ area of focus and only realized it after the first meeting. Our Council further attended the Northern Region Local Government Gender Summit from 03-07 March 2014 in Oshakati and scooped the second runner-up award. We then proceeded to the National Summit held in Windhoek (14-17 April 2014) and scooped the first runner-up. This year we received the first runner-up at the District Summit and the overall winner at the National Summit in Windhoek. It was indeed a learning experience as we improved at every competition we partook.

My perspective in general has changed from the way I used to do things with regards to the gender mainstreaming aspect. This has changed as I have seen the ‘light on the other side of the tunnel’. I did not realize the importance of mainstreaming in our daily operations and the impact it has on our community. Gender links has been the driving force of this whole aspect and I am grateful for Ms. Sarry Xoagus’ unconditional support together with her

team, the deliberations and assistance we received is highly appreciated. For instance, when we recruited our employees being permanent or temporary, we did not deem it necessary to balance the gender, however now we are implementing it. The other issue is when we allocate plots or houses, it was done ‘randomly’ and now we ‘pay attention to details’ and do it the correct way where we deliberately allocate plots and houses to women and bring them on par with the male colleagues. In addition, the political leadership and my fellow colleagues through their commitment and dedication have helped us as a Council to succeed in whatever we do. Committees have been established in various wards to help council deal with land allocation as well as at various water points where the majority are women. They collect the payments and report all issues of concern to council for immediate action and solutions.

Basically it is an issue of mind change and I have realized that after educating my relatives, they now know the ‘essence’ of gender mainstreaming. The response is overwhelming as my sister is also willing after acquiring ‘knew knowledge’ and now does jobs that were perceived to be preferably for males only such as cleaning the yard.

Change is most definitely evident, for instance as a Council we have a brick making project and we recruit community members for 6 months on rotational basis, this was merely done to transfer skills and to empower our people.

As a Council we knew that the unemployment rate is high in our town as well as the poverty level and we wanted to make a difference in people’s lives. Besides the brick project we mobilized groups of people to group them and have a garden project whereby Council donated a piece of land for such gardening project. In addition, after various investors came to invest in our town, they youth were fortunate and are now employed in various shops such as U-SAVE, Style, Pep Stores and others.

I was instrumental in the formulation of various policies in our institution. When we started there was no policy and together with my team we managed to come up with policies such as, Training and Development, Debtors and Creditors Policy, Street naming etc. and these are accessible in our files of evidence. The aim was to have a good start and in the process capacitate our staff members, be able to collect and develop our town. In addition, many of our staff members did not received tertiary education before joining Council; however, today I am proud to say that 65% of my colleagues have obtained diplomas and degrees through the assistance provided by Council.

As a means to create new knowledge several meetings are held with the staff members where we educate them with regards to Gender links, what it means and how we should conduct ourselves and execute our duties to advance the gender agenda. We also have information sharing session whereby various topics such as financial management, team work, alcohol and drug abuse etc. are discussed among staff members in order for us to improve and change our behaviour.

I experienced various challenges among others, the resistance to change by the community, lack of skills among staff members, high unemployment rate

within our town, and lack of infrastructural services. We overcome them firstly by introducing the necessary policies and thereby starting implementing those policies as approved by Council. Financial discipline was instilled and implementing of projects within each financial year was a priority on our lists of priorities as we wanted to better the conditions of living of our people. My future plans are basically to advance the Gender links agenda in our communities and to ensure that I make the contribution that can change our people’s mind-set to be better people in our society.