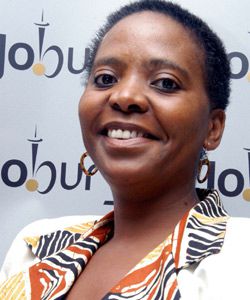 The City of Johannesburg has an executive mayor system, and the mayor appoints a ten member mayoral committee that is the equivalent of a cabinet. This structure is one of the few top decision-making structures in local government in South Africa in which there are equal numbers of women and men. Nandi Mayathula-Khoza is the Member of the Mayoral Committee responsible for Community Development and a key champion of gender mainstreaming in the city.

She says that having gender balance in this top decision making structure makes a difference to the way decisions are made. “Many of these women have been part of the women’s dialogues. These women bring a gender lens to the policies of the city. Whenever we get a report on a policy or programme, we ask how women and men are benefiting. Where we do not believe that the process is impacting equally on both, we send the policy back, and tell our officials to go back to the drawing board.

“We are able to do that with confidence because we have the clout (in the mayoral committee). It is very difficult for women’s voices to carry through, to be heard and be taken seriously when there are few of you. We can caucus; support each other outside and come back inside with an agenda on which there is no compromise. We are also fortunate that we have the support of the men in the committee, starting with the mayor himself who appointed 50 percent women to his inner circle.”

Nandi Mayathula-Khoza describes the women’s caucus that she championed in her role as Speaker of the City of Johannesburg before the 2004 elections as “a space in which women could be free as a group to empower each other in the council.”

The history of the caucus dates back to August 2002 when a workshop on “Gender Equality and Women’s Empowerment” identified the need to establish a Women’s Multiparty Women’s Caucus comprising all women councillors from political parties represented in the Council. The council approved the establishment of the committee, chaired by the Speaker, with the assistance of a Steering Committee chaired by Councillor Sinnah Ramakhula. The caucus met monthly. The office of the speaker gave administrative support.

The caucus aimed to:
â™£ Make the Council a gender sensitive structure on issues of service delivery, development and equal representation, as part of transformation.
â™£ Ensure that gender is taken into account in policy formulation, planning and budgeting processes.
â™£ Promote women empowerment amongst women Councillors and women from the City of Johannesburg community.
â™£ Work on areas of common concern amongst women in the City of Johannesburg for example, women and child abuse, rape, battering, equitable services delivery such as child care facilities etc, and to identify and lobby for policies and programmes to address these concerns.
â™£ Network, lobby and liaise with other women Councillors and other women empowerment projects and organisations locally, nationally and internationally, around Local Government and Gender.
â™£ Create a support system for women in and outside Council.

Among activities that the caucus undertook include:
â™£ The establishment of a Women’s Sector Forum that undertook several consultations with women in the City of Johannesburg on their needs and priorities. An example of the outcomes of these meetings is a woman in Ennerdale working with the city to turn an open space notorious for crime into a park.
â™£ Hold sector meetings, for example on women in tourism, transport etc. One outcome of these meetings was a commitment by the Johannesburg Road Agency to train more women in road construction.
â™£ Convening a major dialogue on “Johannesburg Women celebrating Ten Years of Democracy and Together Building a Better Life.” A major outcome of this meeting was to galvanise support for the South African Local Government Association 50/50 campaign for the 2006 local elections as well as debate the draft gender policy developed by SALGA (see Chapter nine).
â™£ Serve as the key interlocutor for the “Gender, Communications and Local Government” empowerment partnership with Gender Links from October 2004 to May 2005 (see case study six) that included development of a gender policy; documenting experiences of the councillors (the I Stories) and participation in the Sixteen Days of Activism on Gender Violence Campaign.
â™£ Facilitate a number of personal support initiatives through the Women and Councillor Support/ Wellness Committee including 27 women participating in the “New Face of Leadership Personal Leadership and Modern Mentoring Challenge.”

The activities of the women’s caucus ceased at the time of preparations for the 2006 elections and at the time of writing this book had not resumed under the leadership of a new women speaker. However, those who participated in establishing the caucus attest to the role that it played.

“At first I was not attracted to the idea of a woman only forum but after working in the multiparty caucus I saw that it does build women on an individual and a collective basis and it is a space where we engage with other parties and see how they deal with women’s issues and learn from other cultural groups,” noted Nomapelo Maqanda of the ruling ANC.

“Through the multiparty caucus I learnt that the problems that women face in our society cross all political boundaries,” added the DA’s Patricia Brugman-Richards.

“The multiparty caucus helped us as women to unite and become one voice. We were talking about one thing, women’s issues, irrespective of politics,” reflected the ANC’s Sinnah Ramakhula.