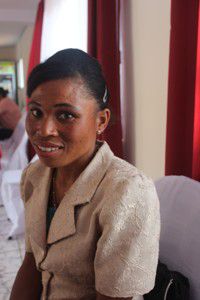 Gender Links has helped me to become more fulfilled

Narindra is 26 years old, married with two children. She is one of the beneficiaries of the project entrepreneurship led by Gender Links (GL) Madagascar in the rural council of Bongatsara, which is part of the GL centres of excellences since 2011.
After her marriage and the birth of her first child, Narindra’s life turned into a nightmare. Her husband began to drink every day and when they had disputes, he did not hesitate to use violence. There were even days when she did not dare leave the house because was ashamed to be seen by her neighbours. This situation lasted for years.
After the birth of her second child, her husband abandoned them, leaving her alone to take care of two children. At that time, Narindra was not working and even though her family helped her through this ordeal, she could not help but sink into despair. “I could not believe what I was experiencing and that I had trusted my husband. I could not bear to see my children complain of hunger” she complained.
After much consideration, she has decided to seek advice from the listening and counselling centre of the council. They explained to her that the father of her children has the duty to help her financially even though their marriage was not working. The centre called the husband and started a process of negotiation. After discussion, they agreed that her husband would pay a monthly alimony.
Meanwhile, Narindra went to look for work in a quarry not far from her house. Although the work was hard, she managed to take care of her children and make sure that they did not lack anything.
In 2013 GL came to Bongatsara council to present the entrepreneurship project in partnership with the council and the listening and counselling centre. Encouraged by the paralegals of the listening centre, she took part in the training programmme. “The training was very easy to follow and rich in exchanges” she stated. She says that it was not difficult for her to put in to practice the knowledge that she gained. After completing all the phases of the training, she became a more fulfilled woman, both professionally and intellectually. “Indeed, the GL programme has improved my knowledge on the subjects of self-esteem, women’s rights and especially techniques on an entrepreneurial approach”, she affirms proudly.
Thanks to her progress, Narindra participated in two national summits and one regional summit organized by GL. Narindra says that the summit was a motivational experience for her as a young activist. The exchanges of culture and good practices during the summits helped her to have innovational ideas for her future life. “Participating in the summits changed my way of thinking and opened my eyes to new perspectives”, she states.
On a professional level, the project helped her to have a clearer idea of what she could do to make her life better. After attending the first training with GL, she was able to start her own small business and develop activities by applying her business plan. Currently, she has become a supplier and employs five people, three men and two women at the quarry, while she was previously employed there herself.
Before GL’s support, even if the money she made was enough to feed her children, she was not able to save for unexpected issues such as medical care, etc. Today, she can save money and make plans. Thanks to the training, she has learned how to separate her professional and personal expenses.
On a personal level, she became more confident about her future. Her mother congratulated her for the great effort that she had made in her life. Asked about her daughter, she stated that as a survivor of violence, Narindra used to keep to herself, distancing herself from other people. Now, she is open to the community and communicates with others. Even her children have noticed that she has become more fulfilled and listens more.
In her private life, after two years of separation, she and her husband reconciled. Narindra argues that money was the main source of their disputes while they were together. According to her, the fact that women are financially dependent on their husbands generates lots of issues for the couple: “Women should help their husband in covering household expenses, but not remain a burden. In this way, harmony and respectful relationships can be negotiated”. After six months of a new common life, they decided to get married legally. Now, they are building their own house.
In the community she is more valued and people come to her for advice. In addition, she can help her surroundings and her family.
In the future, she would like to help women survivors of violence in the council. At present, she is part of an association created by the beneficiaries of the entrepreneurship project. This newly created association will help its members to obtain professional training and search for new opportunities.