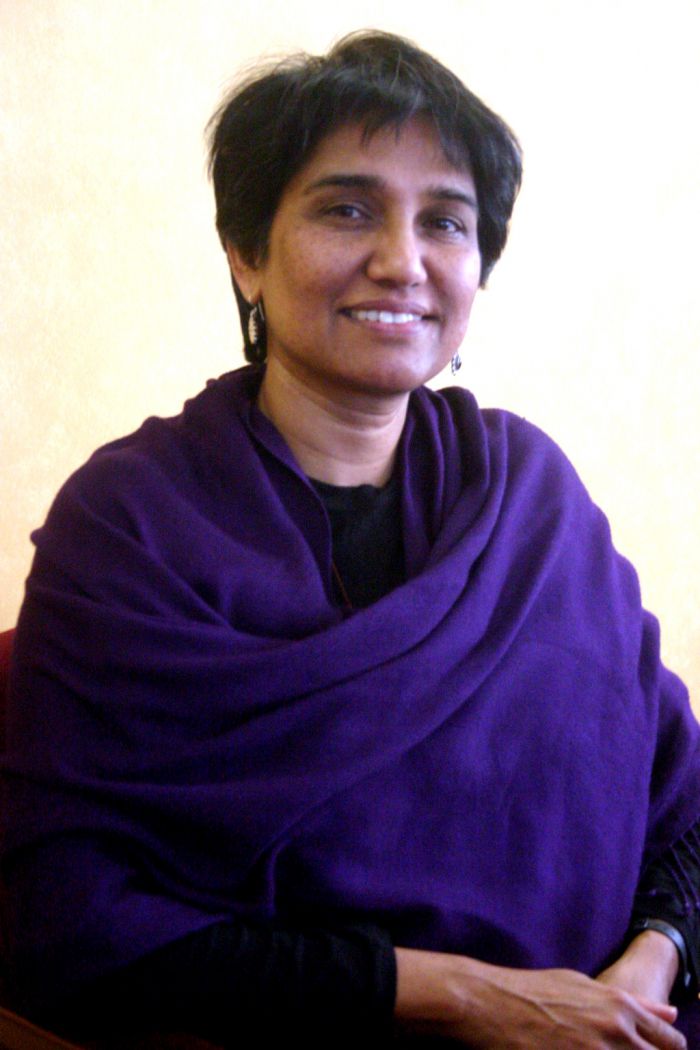 Pregs Govender leaves a lasting impression on most people she meets. In 1998, a local newspaper awarded her a prize for her speech in the debate on the Choice of Termination of Pregnancy Act (CTPA) in the South African parliament. Another voted Govender parliamentarian of the year at the peak of her tenure as Chair of the Joint Monitoring Committee on the Improvement of the Quality of Life and Status of Women (JCIQLSW). An activist against Apartheid since 1974, Pregs Govender taught English in Durban, at schools and at university, before joining the trade union movement in the 80’s. She was National Educator of GAWU (now SACTWU) before heading SA’s first Workers College. Pregs served on the executive structures of COSATU’s National Gender Committee and the UDF-affiliated Natal Organisation of Women.

Pregs was elected Chairperson of Parliament’s Committee on Women (’96-’02). This Committee ensured that 80% of its legislative priorities were enacted by 1999. During the Mbeki era, this Committee held public hearings on the gendered impact of HIV/Aids. After being the only MP to register opposition to the arms deal in the Defence Budget Vote, Pregs resigned in 2002. During the negotiated transition, Pregs managed the Women’s National Coalition, which mobilised rural and urban women to impact on SA’s Constitution. She then worked in the national RDP office, integrating women’s concerns into the RDP. As an ANC member, she was elected to the National Assembly in SA’s first democratic election. In the ’94 budget debates she initiated SA’s gender budgeting and steered its impact on the ’98/’99 National Budget. In ’94 she was tasked with editing SA’s Country Report to Beijing.

Tall, slim, serene and spiritual, Govender’s legendary eloquence was at its best on 2 May 2002 – the day she resigned from Parliament. In a speech brimming with human warmth, the former African National Congress (ANC) MP managed to touch everyone in the packed farewell room – her three children, partner, brother, close friends, colleagues, allies, and yes, her opponents. One who might have been a poet had her life not been so taken by struggle, she recited the many favourite quotations that had given her courage during eight years of driving one of the most remarkable gender justice reform agendas to have taken place in such a short period of time.

She remembered Dora Tamana: “You who have to run like chickens from vultures, speak.” Alexander Ray: “Keep your ears close to the ground.” Amilcar Cabral: “Tell no lies, claim no easy victories.” And Nelson Mandela: “As we are liberated from our own fear, our presence automatically liberates others.”

But, in between the thanks to her “elder stateswomen” and the “wise women” who had mentored her, Govender repeatedly found her way back to the two issues that dogged the latter years of her tenure. These were government spending on a multibillion dollar arms deal in 1998 that Govender abstained from voting on and its policy on HIV/AIDS – especially the reluctance over several months to provide nevirapine – on grounds that it had not been sufficiently tested. At times defying the party line, Govender consistently argued that South Africa cannot afford such high expenditure on arms while four million people living with HIV/ AIDS have no access to treatment and care.

The former MP, who maintains that she “resigned from Parliament but not from politics”, confided that on just about any other issue, she could rely on the support of women in Parliament, and especially in the ANC. On these two issues, she faced a head on collision with the deeply entrenched patriarchal forces of the party and of the state. While never saying as much in a speech so lilting that it had everyone in the room searching for their tissues, exhaustion and burn out had taken their toll. Yet even in that moment of formal retreat, she found nuggets to hang on to – like the words of former ANC political prisoner Ahmed Kathrada, who wrote in the message book given to her at her farewell: “Please continue to make us walk tall, by your courage and devotion.”

Professor Tom Lodge, a leading political scientist observed, “in 2001, the most obviously independent ANC parliamentary initiatives were to be found in the joint monitoring committee on the status of women, chaired by Pregs Govender, which challenged government on spending priorities and Aids policy. In 2001, Govender abstained from voting on the defence budget. Such assertive behaviour may become increasingly exceptional.”

Her human rights activism includes being a member of the global Panel on Human Dignity. Pregs’ awards include honorary doctorates in Law and Philosophy, the first Ruth First Fellowship and the Fulbright New Century Scholarship for the Global Empowerment of Women. She has authored many papers and articles and contributed to several publications. Pregs is the author of Love and Courage, a story of insubordination. In November 2008, Parliament voted unanimously for her appointment as SAHRC Commissioner by President Motlanthe. She began her term in January 2009 and was appointed Deputy Chairperson in October. She leads the SAHRC programmes on Basic Services, CEDAW and PAIA.

Pregs Govender is a phenomenal,honourable,inspirationaland an iron lady in gender equality.She is a true inspiration to all the women of the world and in particular to South African working class women.We salute her in making South Africa great!

I would like to invite you to be our guest speaker for Womens’ Day at Metro Central Education District.Kindly contact me !