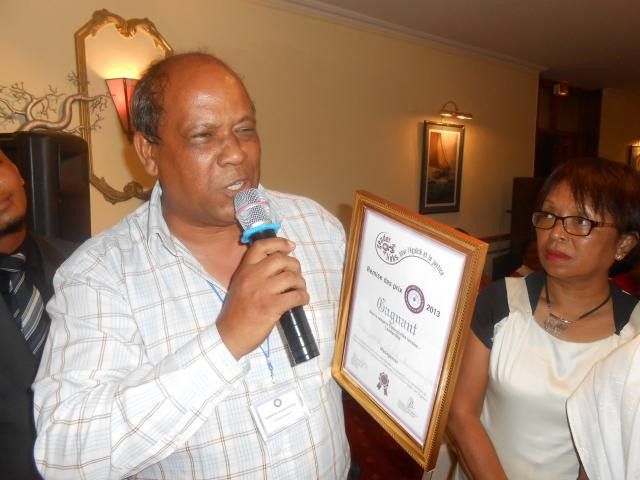 In 2011, RABEJAONA Lala Andrianarizava was a little surprised when Mrs RAVALORIAKA Eva, the Mayor of the Local Council of Manjakandriana, came to conduct training on gender in Andriambilany. At the beginning, he was not very interested, but as the talks went on, he realised that the discussion focused on ideas that he would like to implement. Only the name ‘gender equality’ was a bit new to him. He became so interested that he took part in the debates.

When the time came for the summit submission, all his colleagues encouraged him to apply. From then on, collaboration with Gender Links has not ceased and is still on-going. Now we can see the results. ‘I can say that leading people is one of my natural skills’, he said. ‘Whenever I conduct sensitisation sessions, people are eager to listen to me.’ He is also very attentive to others’ suggestions and can transform them into projects. He is proud that he has enabled a change of mind-set amongst women and a change in men’s views within his local area. Indeed, men and women now dare to express their views and they openly discuss gender.

Before working with Gender links, Lala was a mayor. Gender was inside him and he had already tried to ask women to work with him. Thanks to Gender Links, he was able to ‘quench his thirst for knowledge’, which motivated him to go further. He found the answers to questions that worried him.

His collaboration with Gender Links was specifically in the framework of sensisation within his local council and during participation in the Gender Summit. He believes that communication could be improved.

The cooperation with Gender Links has brought about changes in his own life. It helped him to achieve the projects he has devised and enabled him to develop a vision for the future.

Raising awareness amongst women to encourage them to participate in development projects is really dear to his heart. He would like to note that he grew up in a ‘leadership milieu’, as both of his parents were public leaders. He says that he enjoys leading people.

He has drawn lessons from all his encounters and interactions with Gender Links. He was able to build his capacity, especially when there is a competition. Gender Links has greatly contributed to the changes in his life. The Gender Links team has informed him and his colleagues about the SADC Protocol, given them training on gender, and the procedures for the Summit and the awards. The presentations given during the summit were all enriching and provided an opportunity to open new horizons.

Lala would like to pay tribute to Ms Ialfine Papisy, the Gender Links Country Manager who assisted and supported him when he went to Johannesburg. She provided thoughtful advice on the presentation techniques and especially on how to popularise the work he has done.

The SADC Protocol has helped change his vision, mindset and his working methods. It helps him validate and strengthen his initiative to rapidly achieve his vision and goals. It provides result indicators for each objective.

As for his family life and relationships with others, better understanding reigns in his household and there is much more sharing of ideas. Relationships have also improved. His family enjoys discussions and everyone has the opportunity to develop new ideas. His children recognise that ‘Dad has become someone easy to talk to and he listens to women and shows consideration’.

The community too tends to ask for his views and consult him whenever there is a function, or a project to be implemented. He is invited to various events. Furthermore, three women’s associations have entrusted him with their treasury. He has shared the knowledge that he has acquired with many people, including his colleagues, other mayors, chiefs of villages, councillors and association chairs. Several women are now pepared to take on responsibilities and participate in decision-making. The community has gained a great deal as a result of the legal and judicial changes as every citizen is equal and there is no more discrimination between men and women. Decisions are taken jointly.

In Lala’s area the existence of a ‘kianja maitso,’ a kind of open space for public speaking should be highlighted. Every citizen can freely exchange views and convey information so that everyone feels free and is not discriminated against. The whole population can reach a consensus and take decisions together on how to treat and instruct one another, in other words to give value and consideration to each individual. This has been reported to Gender Links and can be shared with other local governments.

The Malagsy people have faced challenges due to the political crisis which has had an impact on their living conditions and security. It has been rather difficult to find time to exchange ideas, but Lala’s next steps will include the 50/50 campaigns, so that every woman can participate in development. Lobbying and debates are being conducted in order to do this.

To conclude, Lala would like to express his heartfelt gratitude to Gender Links. He sends his hopes that the work will continue so that everyone can realise his/her essence or identity. He also urges everyone who has acquired knowledge from Gender Links to achieve the objectives set out in the SADC Protocol. The resolutions made during the National Summit should be followed up so that Madagascar can succeed as a gender champion.