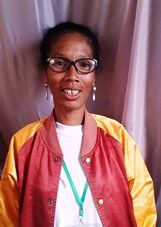 Having my own business helped me to become more responsible

Marcelline Razafindrasoa got to know Gender Links (GL) in 2014 through the listening and counselling centre of Antananarivo. Being one of the beneficiaries of the entrepreneurship project, she has followed all the phases of the training, namely on gender issues, drafting a business plan, the management of resources and self-confidence.

Marcelline has experienced violence for years. Her husband has not ceased to mistreat her since the birth of her first child: expulsion, drunkenness and insults, which always ended in physical violence. At that time, she had just enough money to buy food; her child was just three months old. Her neighbours helped her during that painful period. Supported by her friends, she had the idea of selling cooked cassava, which allowed her to slightly improve her income.

At the beginning of the training her husband did not allow her to attend. Marceline tried to convince him and it is for that very reason that she made a lot of effort. She wanted to prove to her husband that she could be financially independent.

When applying the training in the first phase, Marcelline had a problem developing her business as she did not have enough funds to start it. Later on, as her knowledge increased, she found she could make a loan. When her business developed, she did not constrain her activity to selling cassava, but also added sandwiches, dried fruit and buns. She began to organise and exhibit her goods better, according to the lessons on marketing. For example, to attract the clients, she is using a display stand.

The training was all very beneficial for her. She says that taking note of her expenses helped her to balance revenue and expenditure. Now that she has managed to get a stable income, she can put money aside.

Tangible change was noticed in her household, not only in her daily life but also in the way she interacts with others. In fact, Marcelline has become more sure of herself and it is reflected in her family. Her children are happy to see their mother beaming. “Having my own business helped me to be more responsible. I can decide how to use my money. For me, my children are the priority”, she says. Presently, her children are all schooled and well dressed and she can ensure that they lack nothing.

In addition, her husband has also changed and accepts the organisation and sharing of domestic duties. Rarely does Marcelline see him drunk. Currently, they are supporting each other in the building of their own house. Marcelline firmly believes that financial independence is the key to ending violence in the home. In her community, she has become a good example for all women still living in violent situations. Marcelline has become an active member of the social committee of the council. At the present, she is leading a campaign to raise awareness of women on the importance of financial independence. Her actions are not limited to the council, she is also networking with an association of women in the neighbouring councils.

Her message for all women survivors of violence is: “The cooperation of men and women in the household is the key to end violence and improve gender inequalities”.