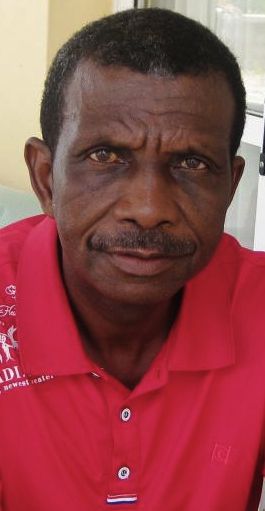 “Before meeting Gender Links I would sneer at any man who would help their wives in the kitchen or doing household chores.” For Betsaha, real men should not downgrade themselves by helping in the house.

As Head of a Foukountany, Betsaha must make sure that the community of his District lives in harmony. He makes sure that Foukountany is safe, and people can go about their business without constraints. He applies the law when he needs to. He deals with grassroots people, and makes sure that their demands are attended to. He works a lot on conflict resolution. He also tries to find ways and means of solving the major problem of gender based violence.

Since Betsaha is retired, he gives all his time to the community, and accompanies them to the Council to seek help and advice. He connections them especially to the “Centre d’ecoute et conseil juridique.” But now that he has the knowledge and skills from Gender Links, it is easy for him to transfer this knowledge to the community.

All experiences that Betsaha has had with Gender Links have been pleasant and positive; since he learned a lot, he said, “I never thought that one day I would be so gender sensitive as to help my wife with household chores. I have always said to whoever wanted to hear that real men do not help in household chores.”

“My wife is the one who is really happy. Our relationship has changed. We talk more, and have so many things to share. We watch television together. I am another man, and this has brought lots of love and harmony in our couple.”

All has changed in Betsaha’s life since meeting with Gender Links. He even thinks that he is a new man altogether. A man who has a new vision of how women and men can work together, hand in hand. For him, the curse of a patriarchal society is that women are always discriminated against. “I use my own example to confirm that when there is no discrimination between men and women, not only does the family benefit, but society at large. He makes it a point to talk about gender and gender discrimination at the start of all his meetings with the community. “My meetings begin with a talk on gender, and I use my own experience of how I have changed to help others to understand. Gender violence can be reduced when man and wife get on well together.”

The new man told Gender Links that had he not changed himself, he could not have changed the mentality in the community. He is so aware of gender violence that he knows how to advise people. Couples get on well together, as whenever he hears that there is a problem he immediately goes and talks to them. There are more women than men coming to meetings in Foukountan, and they go back home they implement the messages they receive.

Had Betsaha not followed the stages of the COE process, especially the one on gender, he would never have changed. From a stereotypically masculine male, he has turned out to be a gender sensitive man and is helping others. He has followed all the stages of the process, and helped to draft the Gender Action Plan

Betsaha told Gender Links that, “if somebody says something incorrect, I immediately ask for an explanation. I want to change the mentality of people. If I have been able to change mine, I am sure others can change theirs.” Betsaha uses the training he got from Gender Links to give training to his community. “I give lots of advice, as I do not want to see GBV in my Foukoutanay.” When he cannot deal with the problems, he sends them to the “Centre d’ecoute et conseil juridique.” “I know there are professionals there who are more qualified than me to deal with the problems, but I send them with a written note about the issues.” Betsaha is proud in saying, “People come to my place to thank me when their conflicts have been resolved. I must also add that very often I ask couples to come and see me so that they can have a confrontation in front of me. This really works.”

The Head of Foukountanay makes it a point to have a District meeting with the community at least twice a month, and each meeting starts with a talk on gender issues. During these meetings he reaches 600 households and at least 3,800 persons; the majority are women.

“Change can only happen is you are prepared to give. Training must be sustained.” Before ending the interview, Betsaha said, “I can do anything in the house from cleaning to cooking, but there is one thing that I will never do as this will take away my dignity: clean the hard layer at the bottom of a cooking pot.”