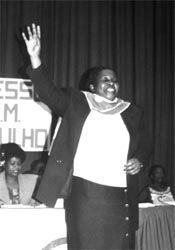 Frelimo MP Salome Moine has learned the hard way that deep-rooted customs cannot be eliminated by the thrust of a fist and slogans or by legislation alone.

After she finished a speech against polygamy in a remote rural area recently, the women – most of whom were older women who had gone into polygamous marriages as a form of survival after their husbands had died in the war – asked what they should do when there were so few men. They felt polygamy was culturally acceptable and an economically viable solution for them.

“I had entered into a conflict with myself,” Moine admitted. “I believe polygamy is exploitative of women”, she asserted. But, she added, it is difficult for a young woman from a different background to come out and criticize the way these women felt. “The women saw polygamy as normal, and the best way to solve their problems at that point.”

Moine, a vibrant and energetic 52-year-old, remembered how, when she first became a political activist in 1974, she was naÁ¯ve about how some women in certain regions had come to accept certain customs that she sees as being against the advancement of women.

She herself “entered into politics not because of feminism, but because my husband was in politics and encouraged me to join. I wanted to be useful to people.” At first she served as a Frelimo mobiliser, working on literacy projects. “Most people (over 90 percent ) were illiterate. These literacy classes were a great step forward for the emancipation of women.”

Over the years, she has learnt that one cannot just go in and impose ideas on people. They have to be empowered and receive education and come to their own conclusions.

She said: “I was young then, and I went into an area without making any sociological study of the group of people I was addressing.”

Moine added that women in parliament have an important role: “They transfer family values and are sensitive in resolving problems of families and this sensitivity can be transferred to Parliament.”