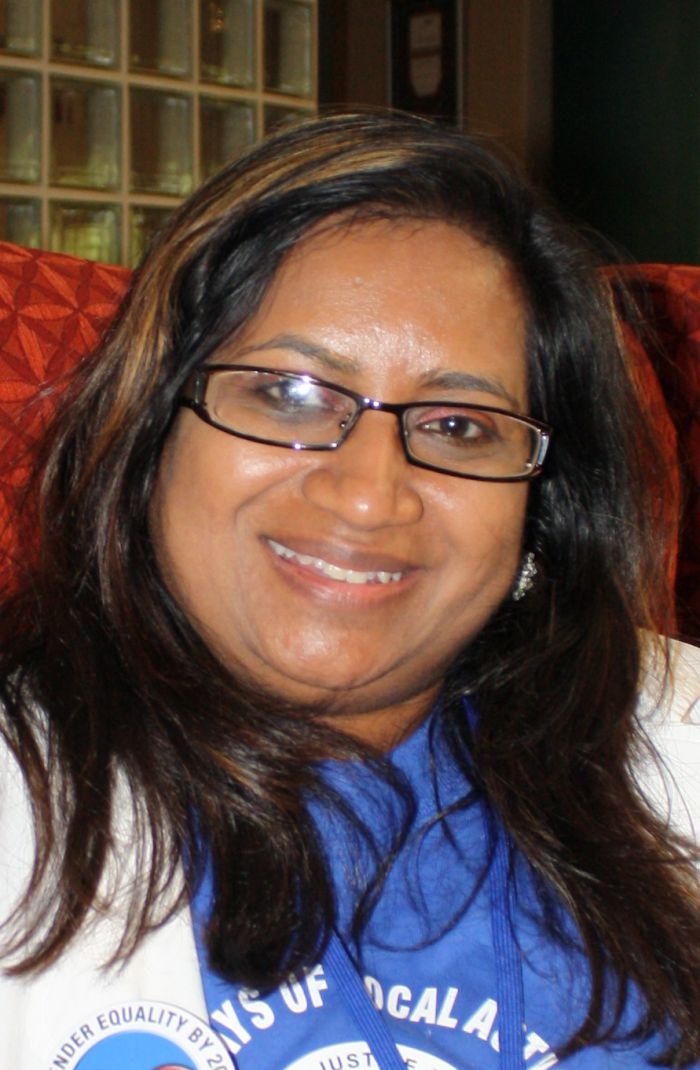 I became politically involved in the 1990’s, when I was still very young. I became a youth representative on the executive of the Labour Party in Port Louis. I was the first Muslim woman in the area to be elected, and from then on, I’ve been working very hard to change peoples mindsets. I’ve had to do this both in the community, and in the people I interact with personally.

I’m Muslim, but I come from a very open family, and had a lot of support from my parents. Many of my relatives have been involved in social work, so my career path wasn’t a surprise. For my in laws, however, my political involvement was quite confusing. I was the first person in their family to be involved in politics. When I first became politically involved, the local political scene was going through quite a hectic period. Muslim parties were against women in politics, and breaking the silence of women was not accepted at all. I had to prove myself.

As the first Muslim women in politics in the area, I had to be cautious. But I also had to bring in support from more women. I set up a women’s association working on social activities; this group encouraged women to create networks, join together, explain problems, and give trainings. This was very rewarding for me, because women were at home. Through working with the Ministry of Women, we had the chance to take day trips out, hold activities, and share ideas and views. Bringing together women from different areas was a start, but it wasn’t enough for me. As more women became involved, we expanded, to try and bring together women of different cultures, background, and religions to come together.

The more successful these initiatives were, the stronger the opposition I started to face within my family. My husband in particular had a difficult time accepting my work, and would sometimes beat me. However, I stuck to what I was doing; I avoided fights, but went on with what I knew was the right thing to do.

As I became well known in the area, my husband began to accept the work I did. One day, after so much opposition, he helped me take a big symbolic step at home. Our house was designed the way many houses in Mauritius are, I’m sure, with the front door opening into a ‘public space’, and that is where I would have to come and go to meet people. However, it was always difficult if people wanted to come meet with me on private matters. That day, we broke down a wall in the kitchen to make a door. It made it so much easier for people to come meet me at home. It was like a door to freedom, to gender equality. It was a turning point in my life.

I’ve now participated in two Gender Links Summits, and I’ve received a lot of recognition for my work, having won both the runner up and main prizes for my work. This has been a great boost to our motivation. The prizes have been for an innovative fund for women’s entrepreneurial development I set up, working with the Ministry of Women. I encouraged women to take advantage of the facilities the government has. From 2006 to 2011, we’ve trained more than 200 in crafts, henna, beauty, interior design, all kinds of things. It includes basic courses on management, marketing, business development, and so on.

These courses are free, which is very important to the more conservative parts of our community, where husbands may not pay for trainings. I see that we are really changing the lives of women. Sometimes, we have to go to families, and talk with the husband and in laws to explain the program, and just encourage them to come and take a look, and see if it’s a good fit. There are week long certificate courses, and this recognition is very important. So often, women have tears in their eyes at the completion of a course, because it might be the first time in their lives that their accomplishments have been recognized and acknowledged. This is a great source of pride for me, because I know that I wouldn’t have been able to survive in my political post without so much support. And as a trail blazer in the Muslim community, it’s so important for me to know that I am able to contribute to the community I come from.

Along this path, Gender Links has been a constant source of support for me. Loga, the Francophone Director in Mauritius, has been an inspiration for me. One of the biggest things I’ve gained from Gender Links is visibility. Before, I was active in the community, but was still invisible to people I hadn’t worked with directly. Now, I have very good media support. The media will follow my steps and see what I’ve been doing, and press around the country tracks my activities. This is a positive cycle, because it strengthens my impact, and brings more respect to my work. In the past, I may not have seen the value of this. But now, I’m always proactive in interacting with the media, because i understand the importance that comes with speaking up as a Muslim, and as a woman. My voice is valuable.

One of my biggest accomplishments has been in the setting up of a community center, where I’ve been elected as President. We’ve been very involved in getting women involved in politics. It has been very difficult; at times, my husband, and my son and I were all threatened. But I’ve found that you find an inner strength at times like that, and when we push, doors open. We now have trainings on local economic development, and on women in politics, in conjunction with Gender Links. As we progress, I’ve been constantly astonished how many young, Muslim women are prepared to take up the challenge of making their voice heard in politics. Everywhere we turn, we’re hearing women say, “yes, we want to be a part of this”. It’s changing municipal structures.

The local municipal bill now supports our cause. Following trainings, we have monitoring going on, and are now working to spread these trainings in other areas. We haven’t made radical changes yet, but we are preparing, and we are making progress. More and more women are prepared to join in and be elected. We are moving forward, one step at a time.

One thought on “Shenaz Soubha – Mauritius”