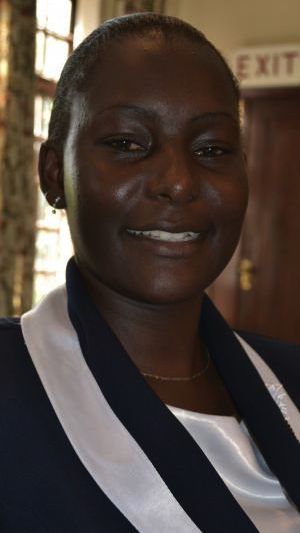 I work for the Kadoma City Council. I am the community service officer responsible for parks, gardens and other community facilities such as halls, stadia, and sports facilities, working with vulnerable groups and gender mainstreaming. I am also the acting housing director.

My initial experience with GL was at the Training of Trainers at Crowne Plaza. There I met the executive director, Colleen Lowe Morna. I was amazed that she can speak Shona eloquently. I came to understand how Gender Links operates, and what it is aiming to achieve. To me, it was an eye opener; I began to see things differently. We were awarded with certificates as Drivers of Change. I was also interested in the issue of climate change, and we immediately ran ahead with that area of work. Subsequent meetings with Gender Links were in the form of the COE workshops we held with the organisation in 2012.

My responsibilities around gender due to my position are quite a lot. We are providing women with markets so that they can sell their wares. This promotes economic development, which I understand is one of the SADC protocol targets. I am also inviting stakeholders who have knowledge of entrepreneurship to give lessons to the beneficiaries so that they can know how to manage their small businesses and they will be able to bring in profits and support their families. These stakeholders also provide them with all the necessary information they require in order to run their businesses smoothly.

I am also taking initiative in the allocation of stands. Women are also being allocated stands, and we have put in place policies to safeguard their properties in the event that one spouse dies.

The challenges we are facing are that people think that gender is only about women. Due to that, you do not get the necessary support you need. The other challenge also is that co-workers do not want to support the issue of gender, because they feel that I might be benefitting as an individual. This is not the case; it’s the community as a whole which will be benefitting. Apart from that, council is facing challenges which include financing. All the initiatives we may need to carry out may be difficult to implement due to the financial crisis.

Changes that I have brought about in people’s lives are that they are being transformed through the markets that we have allocated to people. They have begun their small businesses. Through these businesses, they can now fend for their families. Others were allocated stands and houses, which has resulted in them not squatting.

As a new kid on the block, we have learned a lot through Gender Links, which includes gender and development, and the SADC protocol guidelines. I have now realised that there is more to gender than I first thought. Gender Links has taught us to document everything that we do, not only that which concerns gender everything. I can also say that I am now a better informed person on the issues of gender. We are now looking at everyone in the community when it comes to everything that we do. For example, house allocations or other things where gender equality needs to be practiced. We have now learned to share information with other councils to improve our service delivery.