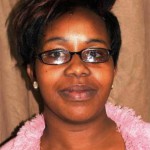 “It is better to light a candle than to curse the darkness”.

“I was born from a family of girls, I got married and also gave birth to three girls which changed my husband’s perspective towards me. He left me for another woman. I am willing to support my girls in everything they wish to be in life”.

“I grew up knowing that a girl would amount to nothing in life until I had first-hand experience of raising three girls of my own. I want to make sure they grow up to be the best they can be in life”.

Sithembile attended all of the stages of the entrepreneurship programme and was one of the most active participants during the training. She shared her “I” story with the group and had a small business of her own, operating it from her house. When she spoke she emphasised the tendency of women to be financially dependent on their spouses and this perpetuates gender violence at household level. She stresses that women should be empowered to be their own bosses.

She operates a “spaza” shop in her house. She started her business when she saw the need for a certain type of household groceries after noticing that people in her area struggle to get to town after work so she sold them the items they usually have to buy from town. She would sell door to door until they got used to her supplies and now they come to buy from her.

She was “linked” to Gender Links by Matsapha Town Council, after separation from her abusive husband. She is a single mother with three girls and she lives in a rented flat at Fairview, Manzini. Her business started growing after she was empowered by Gender Links’ entrepreneurship programme. She is now able to pay rent and put food on the table without depending on child maintenance or anyone else.

“The first day we gathered to write “I” stories, I shared my story and cried the whole time. After that I was relieved that at last someone was listening to me but what took me aback was the session where we learned about gender based violence. I felt very sad as I recalled that I missed out on the opportunity to finish school because my father never gave us an equal chance to get an education but gave first preference to boys. I am willing to fight to change the stereotypical mind-set of society that sees males dominating our society. Woman can do whatever they set their hearts on.”

Sithembile started off by selling snacks to school-going children and her business has taken off and grown to great heights. She has managed to increase her span of operation to selling breakfast hampers, meat (chicken and beef), fish, drinks and wors and she is planning to add more items as per community demand. She now sells her food parcels to community gatherings and to the elderly grant gatherings. She was encouraged by the facilitator’s teaching when she said that … “I am proud to say that I live on my on earnings and I do not depend on someone else”.

Sithembile’s life has changed for the better, she says that currently the man who left her supports her and wants to be involved in his daughters’ lives. He often visits them and attends parents’ meetings. Since she stopped feeling sorry for herself and started doing something productive with her life her relationship with her husband has changed. He no longer quarrels with her over payment of rent and other household items because she is independent. He now sees her as his equal.

Sithembile grew up in a family of six girls, her father ill-treated her mother because she never had boys. He ended up marrying another woman, luckily she bore him a son and he was over the moon. He then decided to focus on giving him the best he could, be it educational support or other forms of support. We ended up dropping out of school and eventually finding solace in getting married. “I so wanted a male figure in my life and I ended up throwing myself into the wrong hands”. Attending the workshop changed my life completely. I am grateful because I learnt to deal with my innermost emotions and look forward to the next day. I was contemplating committing suicide and after sharing my story I let go of that idea. I would have left my girls without a mother if it was not for the entrepreneurship programme that I attended. My mind is now busy, I am always trying new things in my business.

After the training Sithembile has helped educate a market vendor by the name of Xolile Tsabedze. She taught her how to keep records and to separate her business from her personal needs. Xolile’s business has flourished since then and she does not stop applauding Sithembile on her achievement either. “My friend’s business has changed drastically, she is making a lot of money and I am proud of her” says Xolile. She has inspired her to venture into other businesses and not limit herself to one thing. Her husband now supports her and is constantly checking up on the children.

Sithembile’s dream is to have a shop of her own where she can sell her goods without using her house as she currently does. She wants to secure a piece of land where she can build a home for her children to minimise the cost of renting. “I wish Gender Links could extend these training sessions into communities in the rural areas, I am sure many women need such motivation”. She also commended the facilitator on her ability to teach, saying that she is very kind and generous. She is of the view that children should be given equal opportunities and there should be gender equality. “I have no need to conform to the stereotypes others have defined for me.”

One thought on “Sithembile Ndlangamandla – Swaziland”