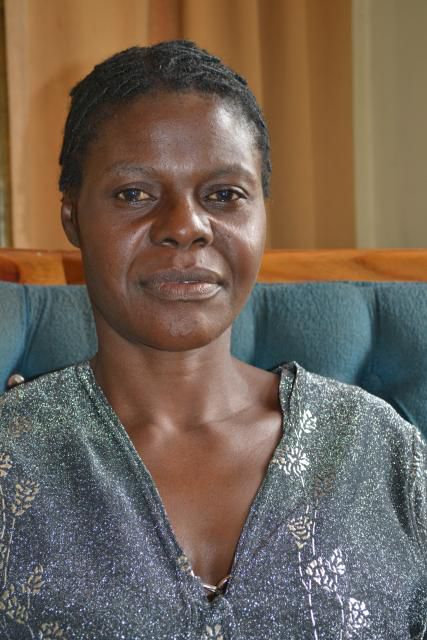 I am a councillor from ward five. My duties as a councillor involve representing people in the area. I meet with people at different intervals, and they present their problems to me. I then present their problems to council so that appropriate action to address the problems may be taken. As a councillor, I also source for funds to carry out projects in the ward. For example, recently I sourced funds and two water boreholes were drilled. One was electrical and the other manual, to ease the water woes in the ward.

I started my political career in 1999. I was involved in politics because of the victimisation and abuse I witnessed in my ward. My husband and I were also subject to this abuse. In 2008, I was elected to be a councillor of ward five. I grew up in Kadoma. I met GL in 2012 here in Kadoma when they held their Summit; there I made my presentation on the project I was carrying out in the ward. Subsequent meetings followed with the COE workshops, in particular the ones in which they were teaching us to develop a gender action plan. It helped us in empowering women. Women were being abused, and they were afraid to speak out, but Gender Links helped us. We should continue working together.

There are projects I am currently undertaking in my ward to address this issue of gender. I bought sewing and peanut butter making machines, which are being used by women in the community. The proceeds from these are being used to provide for the various members’ families’ needs, and also to pay school fees for their children. There is also an old people’s home in my word, which I provide with clothes and food. I also facilitated the education of people living with HIV and AIDS who enrolled for a business management course, so that as they can run their businesses professionally and get better economic rewards from the businesses.

I used to oppose men, but now I think we should just work together equally for the benefit of society and the nation. Gender Links has made a big difference to us; men are now listening to us as women in meetings and other gatherings. I have also learned about abuse and how it affects communities. I believe that as a politician I have a role to play in changing the lives of both men and women in society. The fact that I am now encouraging women to take up posts of influence either in churches or in other spheres of life is a testimony to this. If there are committees in council to be set up, there should be equal representation of men and women.