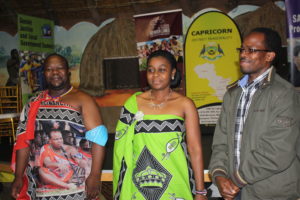 “I am not my job, not my industry but a black woman who works in the construction industry”  .I am a young ambitious lady who is single and a mother of a 9-year-old girl. Currently working for Ngwenya Town council as an Inspector of works and leads a team of males. After I completed school I helped my aunt at her grocery store while waiting for her results. As soon as they came out she applied for Electrical engineering at the Swaziland College of Technology but was not accepted that year and I continued working for my aunt while upgrading English because I did not get good grades on it. The following year I applied for civil engineering at the same college. I was passionate about engineering because I wanted to prove to other females that anyone can work in the male dominated industry I dint like office work but enjoyed working outside the office with males and challenging them.

I started working for a consulting company where I was supervising a contractor, the males working for that contractor took me for granted since I was fresh from college. I then worked for another consulting firm where I was responsible for soil testing during the construction of the MR3 road. I once advised the foreman for the project that the soil they were using was not good for the paver but the foreman refused to adhere to my advice which led to their disagreement. I ended up reporting him to his superiors who praised me for taking a stand. She stands by her motto which says “I am not my job, not my industry but a black woman who works in the construction industry. I don’t need to change to fit within the industry. The industry needs to change to make everyone feel included and accepted.

I would like to see every young woman who wants to venture into the male dominated industry like engineering free to do so without fear or prejudice. I also encourage females to work in contractors instead of waiting for their gender specifications. Ngwenya community is very lucky because it is led by females starting from the Town clerk, councilor and the work instructor.  Young women to stand up and participate fully in gender parity and eliminate gender based violence.

As Ngwenya town engineer, I am is responsible for improvement of infrastructure, making sure that the town is always clean and safety of the workers. I give advice on building plans and submit them to the ministry of Housing and Urban Development. I also inspects building on progress and keeps Ngwenya town clean by supervising the garbage collectors and making sure that drainage system is kept clean at all times. I am also responsible for preparing the engineering report and presenting it to the Board for approval. In addition to that she prepares annual reports and present them to the community where I gets critics about some project I had done for that financial year.

Champion gender has changed my life by being recognized by the community in a way that they now respect me as well as my decisions. I can now stand in front of a crowd with confidence, encouraging young females to be engineers while leading by example. My life bought a positive change to young people because they now come to seek for advice on pursuing their career within the construction industry. I make sure every young women knows what it takes to consider engineering a way to go.