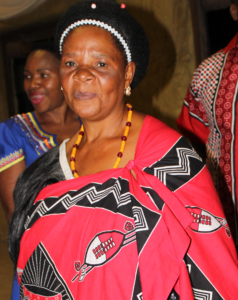 Zodwa Maseko is a primary teacher, she teaches lower grades. She has a soft heart for children. She support the needy children who come from poor families through getting assistance from her colleagues. As a school they sometimes have workshops where they equip each other as teachers about the importance of a child. She also provide children with fresh food by having school a vegetable garden and making sure that it is taken care off in order to reduce poverty at the school.

Zodwa’s encounter with Gender Links was during the 2017 Summit invitation under the climate change category.  She did not understand what was expected from her as it was the first time to hear about Gender Links and the summit.  She works in Ngwenya Primary School as a teacher. She is working with school children.Through working with GL she said that her facilitation skills have improved her confidence of talking openly about certain issues that are said to be sensitive like gender based violence, conflicts to the young children. Having being part of GL summit has helped her a lot as before she only knew women as helpers of men, the minority part of human beings. The support for women empowerment never made sense before but now she knows that women and men are equal.

Zodwa recently joined the 2017 SADC Protocol@Work summit, where she was an applicant in the climate change category. She stated that being part of the summit was not only because she wanted to win an award, but she wanted to network with other women in business, learn from others through interaction.

Her life has changed because she now have a better understanding of gender issues. She has gained a lot of knowledge about the use of hands to earn a living as a women and she has increased her knowledge about the importance of recycling and keeping the environment clean. She believes that if she can be a good example in the community by implementing what she has learned with GL it can influence a lot of women in her community to bring change in their lives. She currently feels the necessity of doing something, this was inspired by the women who were presenting their projects during the summit.

Zodwa have a dream of building her own pre-school so she can get the children closer in other for her to easily know their needs and take care of them. She also wish that young children who are good in motivation or educational talks pay visits to schools so that they can share their knowledge with others this can help in empowering children at a very early age. She also wish that GL have more workshops where they can teach women in the communities about handicrafts since lot of women are sitting at home doing nothing because they don’t have knowledge about these things.