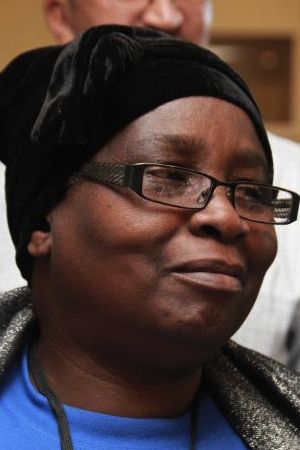 I am determined to make wonders in people’s lives through my own life. I am 54 years old, and the councillor for Bulawayo Town Council Ward 12. I pursued my education up to the Ordinary level, and then I started preparing myself for my political career. I first met Gender Links in 2009 in Kadoma, at a workshop on women’s emancipation. I found the event so educational that I pledged to impart the useful information to the entire community. The presentations that were done by Priscilla Maposa impacted positively on my work, and that event marked the genesis of my subsequent encounters with Gender Links.

My life will never remain static; that, I can promise you! I am going to fully implement changes brought about in my life. Through Gender Links, I was groomed to become an effective public speaker, which has made a substantial difference in my work. Now, I can say that my rights as a woman are on my fingertips, since Gender Links has made me aware of what my rights are, and how I can claim them. I can now say I am more of a human rights activist, and I alway encourage other women to uphold their rights. I have been developed into a person who is well versed in conflict management, which is necessary when people are trying to claim their rights. I deal with conflicts at a grass-roots level when couples approach me for counseling. Often, I find that conflicts can be a result of wrong information or political orientation, and to resolve it, I know how to take things to the highest level.

I work under the local authority, but I represent my community, since I was elected to be the custodian of the people. People had enough confidence in me and voted me into office, because they agreed with my thinking and trusted my abilities.

I give a lot of credit to Gender Links as far as the changes that have been brought into my life are concerned. I believe they have strengthened the skills and abilities that I bring to my position. Priscilla Maposa has been a mentor and role model for me. Before I met Gender Links, I was not struggling to make an impact. The people who elevated me into my decision making position were happy with the work I was doing. However, Gender Links changed my leadership style. I gained useful knowledge and skills that are very applicable to my day to day activities as a councilor. My public speaking skills are stronger, and I am now able to conduct meetings with confidence. Just as importantly, I am now able to participate in the council chamber discussions and decision making processes with confidence.

The knowledge I gained on the SADC Protocol and human rights has transformed me into a visionary woman. Now, I am set to make a difference in the lives of other people, and of women particularly. The practical implementation of the knowledge I’ve acquired through working with Gender Links has seen me successfully resolve family conflicts that almost resulted in divorce. I was successful since I was applying hands-on experience, which I gained through continuous engagement with Gender Links. I myself am a divorcee, which has allowed me to bring my own personal experience to help resolve marital conflicts.

In my community, I have several projects in my name that will help propel my community to the next level of development. Gender Links helped me to come up with initiatives that will sustain my political career. I managed to come up with income generating initiatives that have reduced the proportion of people living in extreme poverty. This has had a direct impact on crime in the area, as well as all forms of GBV. Through working with Gender Links, I then built on this work by unveiling projects that now act as development indicators in the community.

I now feel like I’m a different kind of politician. I spent most of my time advocating for gender equality. This has made me very influential in mobilizing women to participate in decision making arenas. This has turned me into a role model in the ward and the surrounding community. Many women admire my character, and I can see now that they are more willing to step into leadership roles, and emulate these good deeds.

In the future, I plan to cling onto Gender Links, to keep realizing the successes I’ve seen so far. I am planning to contest as a House of Assembly Member in the next elections. I am confident that with the skills and knowledge I have gained, I will achieve the goals I have set. I will continue mobilizing other women to join politics, because I have seen that many women are hesitant to enter the political arena. Finally, I have learned through Gender Links that knowledge is empowering, so I plan to further my education, and become an even more effective leader.