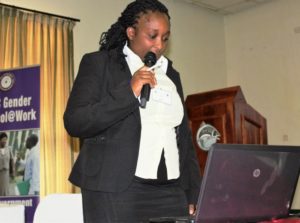 “The COE programme made me to be abreast with times. The ICT training empowered me and the networking skills I attained further widened my horizon and gave me enough space to showcase my capabilities.”

Chinyemba encountered Gender Links (GL) in 2012 and she vividly recall that day because it left indelible marks that will never be wiped from her mind. Fortunately, these marks where the genesis of the transformation that took place in her life.

“When I first encountered GL in 2012 I was a new kid in the house and the people who were already in the programme made me feel as if I was joining a very complicated game and was destined to fail,” said Chinyemba.

Her first experience with other participants of the Centres of Excellence (COE) programme failed to demotivate her but it gave her the zeal to take up the task and do whatever it takes to excel. As Chinyemba thought that she had overcome this first challenge, she was met with another big challenge when she tried to implement what she learnt during the COE inception workshop to her community. The male counterparts, traditional leaders in particular gave her a torrid time as they viewed her as a deviant who was trying to change the norms and values of society.

Chinyemba works as a town planner at Goromonzi Rural District Council. Her responsibilities borders around spatial development, approval of plans, development control, approval of plans, real estate management and gender. Her day to day activities brings her into contact with the community and it gave her the leverage to drive the gender issues. Unfortunately, when she was selected as the Gender Focal Person (GFP) she attended the first workshop where Gender Links Chief Executive Officer (CEO) Colleen Lowe Morna presented the ten stages of the COE programme and the Millennium Development Goals (MDGs).

“Everything was jargon to me and I failed to understand anything. I was on the verge of giving up and I told the Human Resources Manager to find another GFP because I was convinced that I was not the right person for the job,” said Chinyemba.

Fortunately, the Human Resources Manager refused to accept Chinyemba’s request and he reassured her that she is the right person for the task. She finally continued with the programme and what at first looked like a very difficult task turned out to be a platform that transformed her personal life and her profession.

“The programme made me to be abreast with times. The ICT training empowered me and the networking skills further widened my horizon and gave me enough space to showcase my capabilities. I was gradually transformed into a professional who can help workmates to solve ICT problems. The situation I found myself in motivated me to pursue my studies and I added another professional certificate on the walls,” said Chinyemba.

Chinyemba gave credit to GL for these changes that took place in her life. She feels that Priscilla Maposa and Tapiwa Zvaraya played a very crucial role in the transformation that took place in her life. She also singled out Oscar Tsvuura a colleague from Ruwa Local Board whom she said was always there to guide her. The support she got from GL and other colleagues helped her to change people’s perceptions in her community and at her work place. Her eyes were opened and she realised that the council had to do work extra hard to achieve gender parity.

Goromonzi RDC managed to revise its policies and created a conducive environment for gender parity service provision. The council formulated climate change and gender policies and Chinyemba took the credit for she was instrumental in the attainment of this goal.

Chinyemba boasted of the fact that no one in her community will perpetrate violence in her presence.  She is the most feared person by perpetrators of GBV in her community because of the drastic measures that she will take. This attitude towards GBV was influenced by GL’s entrepreneurship programme. The programme exposed her to survivors of gender based violence and through working with them sharing their experiences she vowed to fight GBV till death.

“I identified a woman in my community who passed 7 subjects at Ordinary Level but she was being blocked from achieving her dreams because she failed mathematics. I advised her to write mathematics and I paid for her to do extra lessons with private tutors. This move that I took was influenced by the lessons that I learnt from GL,” said Chinyemba.

The impact of the changes that took place in Chinyemba’s life cascaded down from the community right to her door step. She explained how things changed in her home – “My husband treats children equally and he no longer conveys gender stereotypes in the way he communicates with them. When buying toys he is always very careful not to buy cars for boys and dolls for girls a situation that will create gender imbalance.” She added that her husband equally assigns household duties to both boys and girls.

All journeys are marred with challenges and Chinyemba’s learning journey is not an exception. At the onset of the journey her workmates and community members were failing to understand her. The community leaders felt that they were being challenged by a woman who wants to take away power from them and give it to women.

“I was not deterred by this challenge and kept on working hard until we reached a stage where traditional leaders understood the gender concept. Another challenge that I faced was working extra hours and I was always over loaded with work. To overcome this problem I revised my personal and business schedule and realigned it to the new situation,” said Chinyemba.

Chinyemba has plans to continue doing gender work in her community. She also wants to continue working with other local authorities and strengthens networking. She concluded by saying that she is going to identify one survivor of gender based violence from her community and help her to reclaim her life.