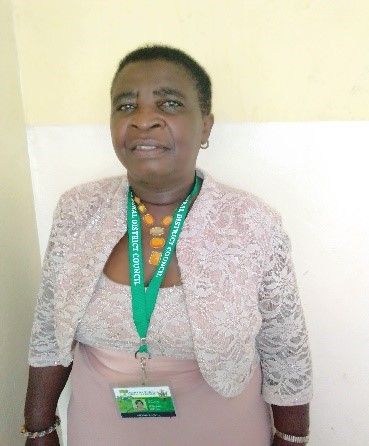 Women leaders are the best leaders, more positive change come with them.

“I thought it was normal for women to be looked down upon and that they should always pave way for men.  That was my situation until I met Gender Links through the COE programme”.

“The confidence and firmness that I have now is a result of my encounter with Gender Links.  Before that, I thought it was normal for women to be looked down upon and that they should always pave way for men. Many thanks to Gender Links for changing my life and other lives through me.”

My passion to work with various people came from the fact that I was a Pre-School teacher for a long time i.e. since 1978. I was looked down upon being a pre-school teacher, it was not something important to my family and husband and they felt that instead of being a teacher I should be looking after the children and had to bear more children for my husband.   We only had 3 children with my husband and my in-laws felt that I should bear more children but I felt, 3 children were enough.  Family members called me names because I only had 3 children.  They also called me a prostitute because I was formally employed.  My husband did not like the fact that I was a working-class woman and felt that instead of us staying in the urban areas like we were doing that time, we should stay at our rural home.  I was forced to go and live at our rural home so that I stop working as a teacher which forced me to resign. I stayed at the rural home whilst my husband was working in Harare.  As if that was not enough, when my husband brought groceries at the end of the month, my in-laws could take them and give to my brothers-in-law’s wives saying they were the ones who deserved them because they had more children.  I was a nobody in the eyes of my in-laws.  My husband was also jealousy to see me working as a Pre-school teacher so that was taken away from me.   My passion, my career, all gone because of patriarchy.

In 1978 I decided to join politics. I was in party structures at Cell then-District level of the ZANU PF Party.  I thought that was the only way I could work with people.  My family was not happy with that move and my confidence was very low.  I managed to be a Youth Coordinator from 2001 to 2005 and also a Village Health Worker. I gained confidence bit by bit but my family was not happy with that.  They continued to call me names.  They said it was a taboo in the family for an inlaw to be doing such activities and they referred it to as ‘kutonga musha’ (Controlling the home). 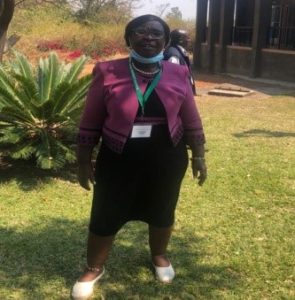 Chemhondoro High School in 2016.  I just heard that it was wholly sponsored by Gender Links and at first I did not have much interest.  I thought 50/50 was impossible but as the campaign progressed, I came to understand that women could also be leaders.  During the next elections, I tested the waters and I submitted my curriculum vitae to be a Councillor and I was successful and was elected as a councillor during the 2018 Harmonised Elections.  This brought great tension within my family but I just stood my ground. I then experienced another encounter with Gender Links’ program in 2018 during a campaign against Gender-Based Violence and this helped me to gain confidence and self-esteem. The Gender Links programmes gave me the strength to stand firm and to stand my ground.  I wanted to prove them wrong, and show them that a women leader can be the best leader.

I am now a Councillor and a member of the Gender Committee of Council.  I have done a lot of things about Gender, this includes giving confidence to fellow women who wanted to be leaders.

I work to fend for my family as a woman. Gone are the days when I had to wait for my husband to come with the groceries. I now have confidence in whatever I do and I even encourage other women to take leadership positions and to stand firm.  I now have my own registered pre-school in Harare, Damafalls Park, my passion, my pride which I thought was water under the bridge came back because of the lessons I learnt during the Gender Links Campaigns. Being in the Gender Committee which came by because of the COE programme brought milestone development in my life. I was able to send my children to school and one of them is now in the United Kingdom because of my efforts.  I have a state-of-the-art homestead as a result of hard work and firmness.  Right now as we speak, I was recently elected as the Secretary for Gender and Culture within my ZANU PF Party- District Coordinating Committee (DCC).  I did not hesitate to campaign for that post.  I also learnt this firmness from the Gender Links Country Manager Priscilla Maposa.  She is a role model.  She is firm and she encourages all of us women to be drivers of change and that is what I am now.

Other people who helped me to change is Alderman Resta Dzvinyangoma being my Vice Council Chairperson and Gender Committee Chairperson.  She taught me to be confident and groomed me to have etiquette.  She taught me to work towards the development of my ward to change other people’s lives.  I also learnt from the Gender Focal Person for Murewa RDC, Winnet Chitauro that women leaders are the best.    Other lessons also came from members from the Ministry of Women Affairs, SMEs and Community Development and the Chief Executive Officer of Murehwa RDC Dr Gurajena.  I am now able to make positive contributions positively in meetings and also to proposed resolutions in Full Council.

My close relations especially family members have improved.  They now respect me because of my work. My husband is now proud of my work.  They always say ‘keep doing the good thing’ My family members and my in-laws came to me for advice when they are faced with challenges.  The whole family run to me for advice because they regard my advice as helpful.  Being empowered with knowledge and skills makes you someone in life.  I give credit to Gender Links for this development.

The community now appreciate me and my work.  I brought change at the community level through facilitating the construction of toilets and various homestead, access to potable water sources by drilling of boreholes by partners, provision of Rural Health Centres.  Through my leadership, we now have a clinic in the Ward.  There were no health centres in the wards, therefore, I am the first female councillor to bring this change in my ward.  One of the clinics is now at an advanced stage of completion.   Roads maintenance for improved access roads and also capacity building and campaigns in the ward are some of the projects that I have done during my term of office as a Councillor or women in local Government.    I have also managed to convince my council bring women empowerment project in my ward; the goat project.

Through my efforts, the council has managed to come up with women empowerment projects.  That was my proposal in the Gender Committee and it was adopted by the council.  I was also part of the women Councillors who went to see His Excellence with a position paper requesting for the quota system to be operationalised at the local level.

During my journey, I faced challenges.  The Pull Her Down Syndrome by fellow women. However, I stood firm and even tried to capacitate the women encouraging them to be leaders. My community had no confidence in woman leadership so there was sabotage on developmental projects at first but I am happy that they now support me.  I just worked hard and did the right thing to produce positive results so that within the shortest period of me being a Councillor, they now appreciate my efforts.

I plan to educate both men and women on Gender-Based Violence issue because I have noted that GBV is a hindrance to rural development.  I would also want to facilitate for provision of more schools in my Ward.