“We strive for change in the leadership style of the Council.” 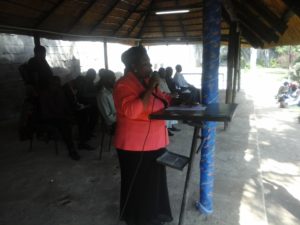 I am a widow resident of Zvishavane Town Council whose husband was a former employee of council. Through my hard work and perseverance I managed to join council as a councillor. My leadership qualities in Gender Issues where recognised when Council choose me to become the first woman councillor to chair the first Gender Committee when it was established. To date I have attended Gender Forums as a representative of council which is instrumental to whenever gender related issues and projects are being carried out by council.

I started the Murambatsvina with thirty women from the ward. The club was meant to ensure that woman get self-reliant on some household basic needs. As such they started by contribution as little as 50cents twice a week i.e on Tuesdays and Fridays. From those contributions they managed to buy house utensils for their homes. From these contributions the women are now able pay $76.00 for two club member’s water bills.

The initiation was brought into being after the club has seen most of its members trapped into rental arears and were about to be handed over to debt collectors. It was through my leadership as councillor that residents of Ward 1 were spared from these water disconnections woes.

My enthusiasm for my work stems from wanting to transform my ward to become the most gender sensitive and woman empowered town in the Midlands Province and Zimbabwe as a whole. This is to be achieved through the promotion of gender sensitive policies to be enacted through the Gender Committee – to recognise the existence of the woman in all areas of authority in council and its communities.

Most of the challenges as a councillor are that of responding to the electorate on issues on implementation and fulfilment of promises made. This is one of the biggest challenges met by a Councillor especially when the economy is not performing at expected standards. At the campaigning stage there are a lot of promises which are made to the electorate but none fulfilled, especially around gender equality and women empowerment.

Championing gender has been fulfilling and left an impact on my life and those around me. As a family member I now gain respect especially from my brothers who always regards me as a mediator whenever there are issues of misunderstanding/disagreements with each other. In the community I am respected as the architect and driver of developmental and gender issues as all concerns of the council pass through me.