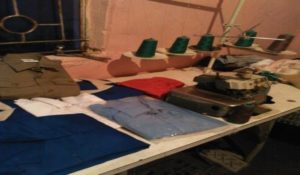 “I will never forget the day I cried while listening to a fellow entrepreneur narrating her experiences of GBV during the 2018 summit. The presentation functioned as a therapy and it healed the old wounds that were hidden in my heart. I am now strong and raring to move forward.”

Sibonginkosi Moyo is an entrepreneur who was a victim of gender based violence and later reclaimed her life. She is one of the women who managed to fight and overcome emotional abuse. Her husband used to abuse her emotionally and it affected her well being. Fighting emotional abuse was not an easy task for her because she was depending on the perpetrator for survival. The husband was taking advantage of Moyo’s dependence nature and always got away with everything. She lived for so many years while struggling with children because the husband was not providing for the family and she was being denied access to productive resources.

Moyo explained how she was capacitated to fight emotional abuse: “I got the opportunity to go to German in 2009 to represent women leadership and the experience widened my horizons. I later did a management course with Natal University in 2010 and I was educationally empowered but economic empowerment was the only missing link to a genuine development in my life.”

The exposure failed to give instant independence to Moyo and she continued depending on her husband for survival. At a later stage the situation forced her to think otherwise and started a sewing business in 2012 with the little capital she acquired from well wishers. She worked so hard and named her business Fortune Faith Sewing Services. The business’ main focus was on sewing and designing school uniforms, ties, dresses, seat covers, curtains and bed spreads.

In 2014 Moyo encountered Gender Links and undergo entrepreneurship training. She applied the skills she learnt and further developed her business. She applied for a loan and used the money to purchase a vehicle for transport. The car was a very useful asset in her business and it immensely contributed to the growth of the business. The transport that was being used to transport products to the clients increased reliability and consistent. This therefore created a mutual relationship between her business and the major clients like schools and hotels.

“I engaged 60 people from my community and I shared with them what I had learnt from GL. I taught them the basics of entrepreneurship like bookkeeping and business management. I also assisted them to start their own small businesses and they are all doing well,” said Moyo.

To respond to the growing demand that came about as a result of the full implementation of the entrepreneurial skills she bought an automated sewing machine and increased the number of manually operated machines. This saw her business maintaining efficiency. She also added new products like khakhis and work suits.

“After I attained financial independence my personal life changed, especially the way I relate with my husband. My husband now respects me and he no longer takes me for granted. The community also no longer look down upon me. They respect me because of the contribution I made to the community through training other women to start businesses.