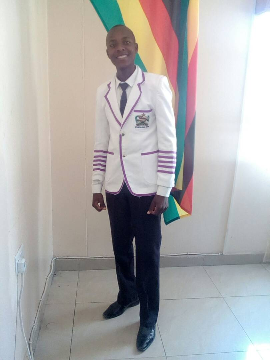 I am a former Epworth Junior Mayor and one of the young people who was given an opportunity by the government of Zimbabwe to become a better person in understanding how the world works .Epworth is a community where a lot of stereotyping is found .They say,”there is nothing which come out of Epworth”, through my experience I dispute such. Junior council changed my life completely. I was someone who was quiet most of the times and I did not know the potential I possessed that could bring change in someone’s life. I was not aware that I can become a leader at some point, not just a leader but a better one. Gender Links changed my approach to life. My leadership qualities improved and was now serving my community and nation at large through advocacy and lobbying for an inclusive service delivery system in Zimbabwe. Participated in issues to do with leadership through workshops from National junior council association.

Personally, I started to grow in a person I envy every day.I started to make informative conversations with peers from other parts of the country and I started to see change in my participation. I am now able to stand in front of everyone with nothing but confidence. This is why I really thank programs brought to us through ministry of youth and local government departments. Through my participation in issues to do with local governance, I became a different resident of Epworth.  I got to understand how local authorities works and even municipalities and rural district councils.

I loved the fact that I was a junior councillor from a marginalised community, which gave me the drive to change the narrative of my community and through participation and workshops being supported by Gender Links, Epworth Local Board and National Junior Councils Association of Zimbabwe. I was able to stand up for my community showing them that, even though it is a marginalised community but within it are young people who are talented who just want to be heard and tell their own stories without being stereotyped .People from different communities in Zimbabwe started to know more about real Epworth through the opportunity I had been given as a Junior councillor. My extended gratitude goes to Gender Links.

In a journey of leadership, it is not always about happy moments but you face challenges on the way. During my term, what disturbed me the most was the way we were being treated for the first time whenever we had gatherings and workshops as junior councillors. I discovered that most of the people who were around us thought that people from Epworth are not capable of anything. I do really remember one time where I went to a workshop where I tried my best to raise up my hand so that I can participate effectively but during the whole programme, I did not get the chance to participate. That actually did not bother me but it gives me the power ,the wheel and the drive to tell the world that Epworth community is not a slump but a community with young people who can stand up and speak out. I became an ambassador of change on how people viewed my community and my appreciation goes to Gender Links and their programs and trainings. It really made me who I am today.

I was once someone who did not understand issues to do with gender. For me I was referring gender to women only but after meeting with the Gender Links I remember at our first meeting at Epworth local board hall strongly arguing that ‘gender’ means women. The most interesting part in this workshop was that, I was not the only one with the mentality of thinking that gender only refers to women but most of the junior councillors has the same ideology. Facilitators from Gender Links clearly explained to us the definition of gender from a sociological perspective. We became aware of the meaning of it that gender is a socially constructed which distinguish between males and females through their societal roles. It was a memorable experience indeed due to the fact that the information exchange of that day changed how I view women and men in the society we live.’’

Whenever one learns something new, there is always something important and something that can affect you as a human being. Well, from the workshops I attended as a junior mayor taught me to be supportive to females due to their experiences and are still induced with cultural values and socialisation process. After learning and becoming aware of gender mainstreaming, I realised how much women have been left out in terms of self-development and even other male counterparts.    I was emotionally disturbed to hear that some of the people did not understand gender as it linked to equity and equality to abuse their loved ones. I thank Gender Links for making me understand gender in a broader way I understood it. I was able to disseminate the information to other peers in schools and the community at large. I saw change in reduction of abuse in schools amongst teachers and students.

From the workshops, I became a driver of change, I started to see with another eye and I became a feminist [I STARTED TO SUPPORT WOMEN SO MUCH] because through trainings I discovered that most women were being exploited due to their biological makeup. From the workshops I personally went back in my community and made sure that gender issues were well known in schools and we have witnessed a great change in terms of girl child confidence. Most girls used to depend on boys but through gender trainings, they started to see the world differently. We have seen more girls taking influential positions, not just girls but even female teachers at my school who used to be looked down upon by male teachers became safe because they had the chance to hear how powerful they are if they stand up for themselves in a good manner without causing violence.

After two years of serving in the council, I became bold enough and did not want to waste the talent and the information I had attained. I wanted to continue with advocacy and serving my community, so I decided to come up with an idea of forming an association with the support from the junior councillors I had been working with. I wanted to see change and also be a driver of change in my community. I wanted to continue representing the rights of young people in Epworth by being their voice. This association is called Hope for Youth and Women Association. It is there to make sure that health issues and social wellbeing of every youth is being taken care of.

Everyone is a leader, some are born leaders and some need to be nurtured to become leaders. Most of all I would like to thank the government of Zimbabwe for giving young people like us to participate in issues to do with local governance and service delivery. I also want to give my special thanks to Gender Links in partnership with National Junior Council’s Association and Epworth local board for the trainings and support they gave me. I also urge young people who are out there not to look down upon themselves because of where you come from. Be the driver of change you want to see.