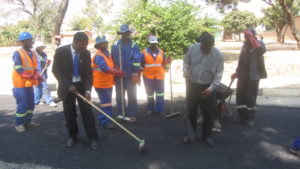 “I influenced the installation of CCTV at my work place to prevent cases of sexual harassment.”

Togarepi Nerwande’s encounter with Gender Links (GL) taught him the importance of evidence and documentation of everything that he does in life. His subsequent journey with GL made him to understand that documentation and evidence of the work done is a prerequisite to success.

At first when GL was demanding evidence files from participants of the Centres of Excellence (COEs) programme at the summit which he has viewed as a necessary to document and keep track of the council’s gender activities. The situation that he was exposed to gave him the leverage to invest in human capital and propelled gender planning at his workplace to the next level.

The journey that Nerwande travelled with GL changed his personal life and today he has a number of achievements under his sleeve. One of the personal achievements he records is the ability to do things in a systematic way. Before his encounter with GL he used to do things in a haphazard way and his subsequent encounter with the organisation ushered a new characteristic that is now visible in his life.

When Chimbindi was trained as a Gender Focal Person (GFP) he implemented the skills he attained at his workplace and in his family. He advocated for policy change and transformed the way the council used to do things. In his endevour to mainstream gender in service provision he managed to influence a policy that prevents a husband from selling property without consent from his spouse. Apart from this great achievement, Chimbindi boasted of other skills he attained like presentation and networking. Furthermore, the networking skill he attained enabled him to copy good practices from other local authorities and implemented them at his council.

Along the journey to gender equality, Nerwande has since groomed another GFP for the sustainability of his efforts. The move that he has taken managed to institutionalise gender issues at his organisation.

His most memorable experience was when he was given the chance to participate in the field visits with the Embassy of Sweden, an honour which saw him prepare the council for that visit. The visit had a lasting impression on him as he needed very little help from GL.

The change that took place in Nerwande’s life changed the way he relates to close relatives and the way he does things in his family. He now treats everyone as equals

“The knowledge I attained from GL changed me and I now always clutch with councillors on balanced recruitment. I have made a commitment to ensure that there are enough clinics in our community so as to respond to the demands of sexual reproductive health,” said Chimbindi.