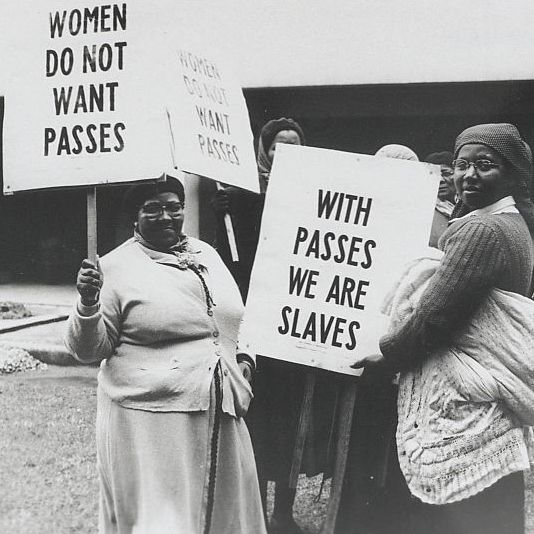 Grahamstown, 8 August: Tomorrow we celebrate Women’s Day by commemorating the 20 000 women of 9 August 1956. However, 2013 marks a number of other important anniversaries for South Africa: the first anniversary of the Marikana Massacre, 100 years since the very first anti-pass march lead by women of Bothaville and Bloemfontein in 1913, and 100 years since the colonial government passed the Native Land Act.

The Native Land Act is perhaps one of the most important pieces of colonial legislation in South Africa, which saw the allocation of 13% of South Africa’s land being set aside as ‘reserves’ for ‘non-whites’.

By the early twentieth century, African urbanisation was happening at a rapid rate. In order to pay the government taxes imposed in the reserves, people generally preferred working in the towns than at the mines and the farms.

The state disliked the movement of African women into towns because they wanted to reserve secretarial and domestic jobs for poor white women. The new Christian morality and conservatism of traditionalists also viewed single women in towns as immoral signifying the breakdown of ‘tribal discipline’.

In a less famous narrative, in October 1955 the Federation of South African Women (FSAW) and their allies in the Congress Alliance organised a demonstration that saw 2000 women march to the Union Buildings in Pretoria to protest against the government’s new pass laws and the Bantu Administration Act.

The next year on 9 August 1956, even more angered by continual police brutality and inadequate access to housing, the women organised a 20 000 strong National anti-pass march to Pretoria. Women from various faiths, political backgrounds and cultures worked together, selling cupcakes, jewellery and other goods to raise transport money for the protest.

South African gender activist and author, Nombaniso Gasa has written about the determination of these women, despite the male leaders of the African National Congress (ANC) expressing concern and disapproval of women organising and executing such a mass protest with the success that it eventually was.

These women not only called for freedom of movement and women’s emancipation, but the FSAW also called for women as equal partners in the liberation struggle. Lilian Ngoyi, one of the women who led the march expressed this so well by saying, “The husbands speak of democracy, but they do not practice it in the home.”

Accounts of the 1956 anti-pass protest often focus on the central role of FSAW and ANC Women’s League, following the ANC’s shift in the 1950’s to mass defiance campaigns. However, these accounts seldom admit that the ANC, from its inception, had an urban bias. Many women in the rural areas even travelled to Pretoria to protest, yet the ANC never directly acknowledged the importance of rural resistance.

In 1951, when women in Zeemont refused to carry passes, the Prime Minister and architect of Apartheid, Hendrick Verwoerd threatened to depose their chief. The women protested preventing this from happening.

Although chiefs were sometimes a source of refuge, as early as 1868 the indirect rule through tribal administration, begun to frame African women as minors. This administration modified and institutionalised customary laws which favoured African men as patriarchs and gave white administrators more power by making the chiefs accountable to the state.

Yet, at every point women defied these mechanisms of control or used them to their advantage. Even in 1956 when the government tried to impose stricter laws on women’s freedoms and cut off the transport going to Pretoria, it only made the women more determined.

One hundred years ago, when the colonial government passed the Native Land Act, it guaranteed the continuation of the cheap migrant labour system that persists today. Much has changed since then, but the exploitation remains.

August marks the first anniversary of the Marikana Massacre, where the South African Police Service opened fire killing 34 protesting miners. Women living in places like Wonderkop, Marikana are continuing the struggle in a different space and time. The home-space, which is the source of their oppression, is also a space of strength and defiance.

When we examine the history of women’s struggles and defiance in South Africa and elsewhere, they are often organised around livelihood: access to food, housing and healthcare. Feminists often construct an idea of women’s resistance, which puts the home, the family, and the church outside the realm of struggle and emancipation. Yet, these spaces have been where women have found the tools for political expression, and a base from which to organise.

The women of Marikana, like so many others before them cooked, cleaned, cared for and raised money to feed the protesters and their children. This is not ‘women’s work’, but it has historically been women who have done this work, which is not waged, not acknowledged, not celebrated. However, it is this everyday defiance and strength, which make these women revolutionaries.

They continue to fight for food, housing, water, roads, protection and justice. Last Thursday female mine workers from Lonmin joined hands with other women in Wonderkop to march for peace as part of marking Women’s Month. As Civic Leader Messina Ouma Makgope rightly said, “It is time to draw a line in the sand and say no more abuse and violence, enough is enough, as women we should be defiant in the face of adversity and refuse to be victims.”

Camalita Naicker is a freelance journalist currently completing her Masters in Politics at Rhodes University. This article is part of the Gender Links Opinion and Commentary Service, special series on celebrating Phenomenal Women, bringing you fresh views on everyday news.