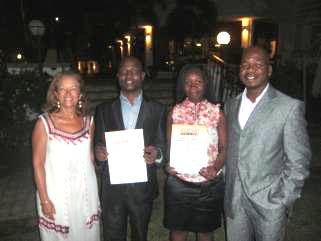 GMPS launches in Swaziland and Mozambique

Gender Links has continued with its media advocacy work in the region, taking the GMPS findings to two more countries. The Swaziland report was launched in Mbabane on 10 March with the Mozambique launch following closely on 16 of March in Maputo. The GMPS in-county launches have given the media and audiences an opportunity to engage with their country-specific findings as well as to think about possible strategies to achieve gender balance in the media.

These also help profile and give visibility to Gender Links’ work in the region. The GMPS advocacy workshops are also a stepping stone towards the roll-out of gender policies in-country.

During the Mozambique launch media prizes were also awarded to two journalists, Salane Muchanga and Alves Talala, who have excelled in mainstreaming gender in news coverage in Mozambique. These awards were linked to the Gender and Media Awards held in Johannesburg in October 2010. The two journalists shared the prize in the Features category. As Gender Links continues to work with Mozambican journalists though the opinion and commentary service, it is particularly encouraging that these two are already producing award-winning gender media content.

Comment on GMPS launches in Swaziland and Mozambique Cancel reply