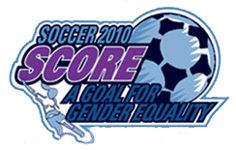 Score a Goal for Gender Equality!

The Gender Links Score a Goal for Gender Equality! Campaign was officially launched on December 10th, 2009, Human Rights Day, and the last day of the Sixteen Days of Activism. The day featured presentations from panelists as well as five seperate working group sessions, which addressed the gendered aspects of Soccer 2010. The Gender and Media Diversity Journal: Issue 7 : Gender, Media and Sport was launched and participants attended a soccer match from two local women’s soccer leagues. Sister events were hosted simultaneously across the SADC region.

Preceding this, on November 25th, 2009, Gender Links urged Southern African governments to put prevention at the centre of national action plans to end gender violence during the Sixteen Days of Activism on Gender Violence. In a statement, GL said that its slogan this year will be Halve gender violence by 2015: Score a goal for gender equality in line with the target set by the Southern African Development Community (SADC) Protocol on Gender and Development.

During the Fifteen year review of the Beijing Declaration and Platform for Action at the United Nations Headquarters,   Gender Links hosted the panel, “Score a goal for gender equality: Gender and Soccer 2010” which was hosted both in New York and at our headquarters in Johannesburg. This panel was followed by a one hour cyber dialogue, which connected those in both locations as well as participants from across the globe.

Gender Links in partnership with the National Community Radio Forum (NCRF) and Ecumenical Service for Socio-Economic Transformation (ESSET) hosted a seminar on World Press Freedom Day to discuss the role of community radio in “giving voice to the voiceless” during Soccer 2010.

This has been followed up by a community radio initiative which will be implemented from 15 June À“ 15 September to raise awareness on human trafficking. This campaign will be held in partnership with National Community Radio Forum (NCRF) and Community Media for Development (CMFD) and will be supported by IOM and OXFAM.

On June 18th, 2010, Gender Links will host the event, Opportunities, risks and voices of young people during the 2010 project. This event will launch our community radio communications campaign, and create a space for advocacy and awareness raising on the risks 2010 poses for youth.

Comment on Score a Goal for Gender Equality! Cancel reply