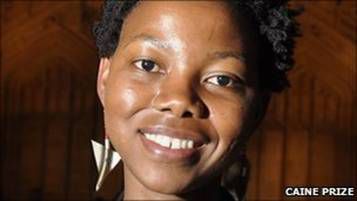 Zimbabwean author NoViolet Bulawayo won a major African literary award the Caine Prize for her short story about a starving gang of children from a shanty town who steal guavas from an upmarket suburb. The story titled Hitting Budapest is about six children including one who is pregnant with her grandfather’s baby.

At the beginning of the story, first published in The Boston Review last year, the narrator explains why the children are heading for Budapest: “There are guavas to steal in Budapest, and right now I’d die for guavas, or anything for that matter.” “There they encounter this lady from London who is more interested in taking their picture, which I guess happens when Westerners go to Africa, but she fails to realise that they are hungry,” Ms Bulawayo told the BBC’s Network Africa.

Ms Bulawayo says she identifies with the characters – Darling, Bastard, Chipo, Godknows, Stina and Sbho – and in the story she is “marrying the personal with the imaginary”. “Some of these incidents in Hitting Budapest are taken from my own life – the stealing of guavas to begin with, growing up less privileged and having these dreams.”

“The language of Hitting Budapest crackles,” said judge chair Hisham Matar, who announced the winner at a prize-giving ceremony in the UK city of Oxford on Monday evening. “This is a story with moral power and weight, it has the artistry to refrain from moral commentary. NoViolet Bulawayo is a writer who takes delight in language.”

Born and raised in Zimbabwe, Bulawayo has just completed her MFA at Cornell University in America, where she now teaches. “The story came from this need to engage with the world,” she said this morning. “I’m interested in what happens when two different worlds meet in a problematic way, I’m interested in honesty and in violence. These are real issues and real things.”

Although her character Darling longs to live in America, and Bulawayo has lived in the US since 1999, the country “does not feel like home”, the author said. “I miss home. I want to go and write from home. It’s a place which inspires me. I don’t feel inspired by America at all,” she said.

In the past, the prize has been won by such African writers as Wole Soyinka, Nadine Gordimer, Brian Chikwava, Leila Aboulela, Helon Habila and JM Coetzee. Bulawayo has just completed a novel, titled We Need New Names.

Read the full story below.