GMDC Newsletter Investing in the future: The GL internship program... 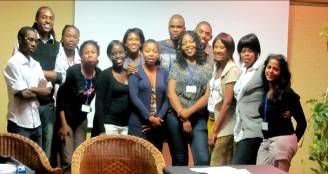 Investing in the future: The GL internship programme

Little did GL know back in 2004 – when it hosted its first intern – that seven years later, in 2011, the internship programme would be one of its flagship projects.

Today, GL sums up the internship project as one in which it is making efforts to “invest in the future”. But what is “investing in the future” about?

In October 2010, GL received the prestigious “Investing in the Future” award from the Mail and Guardian Newspaper for pioneering a new kind of leadership through its Gender Justice and Local Government Summit. However, it is not only through this programme that GL has been investing. The award was just the tip of the iceberg as far as the huge investments GL has been making toward the overall development of the SADC region. One of these investments is the internship programme, which is implemented by the Gender and Media Diversity Centre (GMDC). Through this programme, GL is building the next generation of gender, media and development advocates and experts.

In Giant Footprints, Chapter Four provides details about how the internship programme has evolved through the years. It is now an institution at GL which is helping strengthen relationships with journalism and media institutions. To read the chapter, click here.

From 28-30 March more than 265 participants from ten Southern African countries converged in Johannesburg, South Africa for the second Gender Justice and Local Government summit. The event showcases examples of local efforts to end gender violence and empower women across Southern Africa. Convened by Gender Links under the banner 365 Days of local action to end gender violence, the summit was attended by journalists, local government authorities, municipalities, NGOs and representatives of ministries of gender and local government.

Interns from the GL head office, satellite offices and field offices participated in the summit. Thato Phakela said that, “I got to meet different people from different countries, networking and making friends. It was interesting to see so many Africans standing together with one vision to fight gender-based violence. I was also overwhelmed by the kind of projects they run and the creativity around those projects. The most exciting part was meeting other interns from field offices, working together and sharing our different experiences. I was excited to be given a chance to be part of the summit. I got a chance to utilise my journalistic knowledge on the second day when I was tasked to interview people who presented their projects on the fight Gender Based Violence in their communities. Trevor Davies, the camera-operator, also helped a lot and gave me guidelines on the best way to run audio visual interviews.” Phakela is an intern from the National University of Lesotho.

The full Gender Justice and Local Government Summit report 2011 is available from https://www.genderlinks.org.za/page/gender-justice-and-local-government-summit-2011

Comment on Investing in the future: The GL internship programme Cancel reply