Gender and Media Women kick their way into football_Times of Zambia... 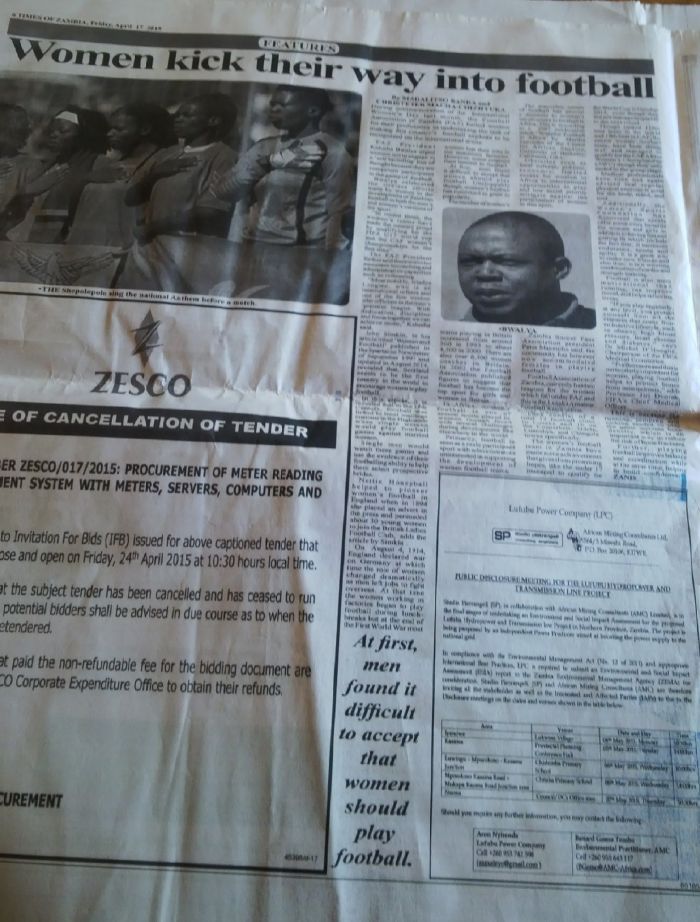 Women kick their way into football_Times of Zambia_17 April 2015

Name of article/story: Women kick their way into football

Name of Publication: Times of Zambia

Football is a game which from time immemorial has been considered to be that for men or boys. The gender roles assigned by society have prescribed football as a game to be played by boys and men only.

If one has to go to a rural area today, they are more likely to see only boys and men in football pitches because cultural practices and norms are still considered high in rural places. If one is to spot girls or women around the pitches, it is more likely that they will be playing the role of cheering or even picking up balls which go off the pitch.

It was even considered a taboo in the old times to see women near football pitches as such would be mistaken to be chasing after men and not being there to be entertained.

However with time, things have started changing and we are seeing football teams of women being formed with others even competing at international level. Women and girls are free to go and watch football games although it should be admitted that it is still game played by men.

By virtue of forming female football teams, it is a sign that society and the world at large have started appreciating women’s presence in football.The above article, starting from the headline gives reasons why women should continue playing football.

He recognizes the role that women have played in spot and gives many other women reason to participate in the game.The articles which gives the history of how women started participating in football also highlights how men at first found it difficult to accept that women too can play football but further says that because of the zeal, women football has today grown.

The story authored by a female reporter challenges the stereotype and breaks the myth that women can not play football. By virtue of the story coming from a football expert telling women not to belittle themselves in sport, it gives them reason that them too can do things which are perceived to be for men.

The article also gives history of how things in the football industry have changed to accommodate women which means that women are not only viewed as people who are supposed to be in the kitchen to do house chores while male counterparts are busy relaxing in the football pitch.

Since football is also a source of living in that in football people make money either as players or as administrators, the article gives hope to women that they too could be part of the administrators of football and could benefit economically from it.

Who says that women do not need time for entertainment? The article gives every reason why women should continue to participate in such games which have for long being considered to be a ‘man’’s game.Further, the article articulates the fact that sport such as football is good for the well being of women and girls and raises self esteem for women.

They know that they are able or they can have the zeal to compete with male who have for many years being considered as the only ones who could do the sport.In Zambia for example, we have had a record where most of the football administrators are male giving an impression that women can not do anything in football.

However with such articles in place, many women would be encouraged to position themselves not only in participating in the game but to also be in charge of football either as couches or any other position.It gives hope that women and girls are slowly claiming space in places where it was almost impossible for them to participate as it certain areas such as football were considered to be a preserve of men.