News and opinion CSW59: Gender, media and communication are intrins... 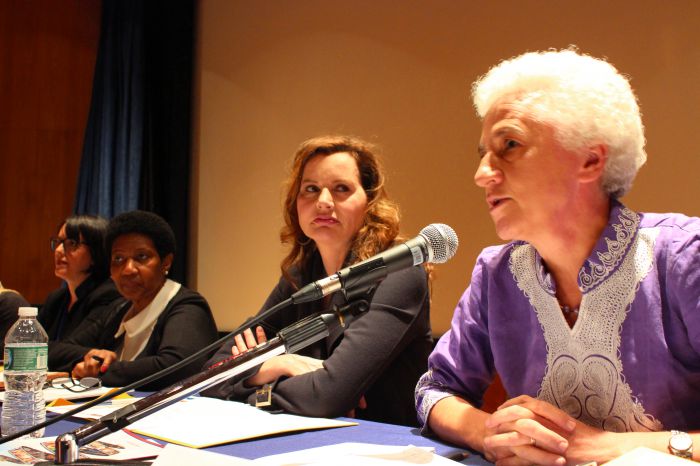 CSW59: Gender, media and communication are intrinsic to who we are!

New York, 13 March: Twenty years ago, I was a young journalist working for the New Dehli-based Women’s Feature Service, producing a daily newspaper in Beijing. We had no E-Mail yet. We had to go by bus from Hourou, about three hours away, to the main UN meeting, to file our stories. There we found various conservative forces hard at work rolling back the fragile gains made by women. So much has changed, yet so much remains the same!

Now we have E Mail, we communicate with the speed of light. The information revolution engulfs us. We have access to more information than ever before. But do we have more wisdom? As I write these words, various regressive forces in New York are hard at work rolling back our fragile gains. One of the most fragile gains is Section J of the Beijing Platform for Action – media and communication. For reasons we cannot understand, media and ICTs are glaringly missing from the Sustainable Development Goals 2015 to 2030. Gender and the media is totally invisible in the SDGs. This flies in the face of the facts.

Since 1995, the Global Media Monitoring Project (GMMP) has monitored the news across the world one day every five years. This study has shown that women sources (views and voices) as a proportion of the total have increased from a mere 17% of the total, to 24% at last check. That means women constitute more than half the world’s population, but less than a quarter of those whose views and voices are heard. At a moment we are talking about equal voice, choice and control for women. The simple fact is that women are effectively silenced every day by the mainstream media. Agnes Callamard, Executive Director of Article 19 that promotes freedom of expression globally, became very unpopular on Fleet Street when she declared at the launch of GMMP 2010 that the media practises a kind of silent censorship. Western media? Censorship? Yes, censorship. What else can we call this systematic side lining and stereotyping of women in the media?

Every 8 March, UNESCO runs a campaign – Women Make the News. For one day in the year, the media is called upon to allow women to plan, produce, and market the news from a woman’s perspective. A decade ago, Gender Links took this campaign further. We challenged male editors to “strip the backpage” pin ups of skinny, blonde, blue eyed women who hardly represent the majority of our women, and celebrate women in all their diversity – black, white, brown, tall, short, fat, thin, and in all their shades of beauty, whatever that word might mean. My deputy director and I were vilified by the mainstream media in a way that stunned us. We were called everything from the mamapara (fool) of the week, to lesbians who can’t find husbands. One newspaper, the Sunday Times, got a woman columnist to write an article something to the effect that Mother Hubbard needed to get a life!

For the first time in my life I had to bring out my personal CV to justify my voice in the public space. I pointed out that I held a Masters’ degree in Communication from Columbia University (one of the most prestigious in media circles); was happily married; and had two daughters for whom I wish the world on a silver platter. I pointed out that giving equal voice to women and men, and celebrating women in all their diversity is as basic as Journalism 101, where I learned to get all relevant opinions on any story; give voice to the voiceless; challenge tired stereotypes; seek out what is new, what is different: set the agenda for the future.

This is an argument that is gaining ground, but we still have a long way to go. Gender and media activists have been pursuing two broad strategies since Beijing:

– Making our own media: The IT revolution has brought with it many vices, many further divides, new forms of gender violence. However, it is an open space that we can also claim. At GL we run a programme called “Making IT work for Gender Justice.” The Internet is here to stay. If we do not get on the superhighway, it will pass us by. Increasingly we live in the world of the citizen journalist. The first person on the scene is not the media, but the people – witness for example the Arab spring. We can make and capture news on our cell phones. We can and must tell our own stories. We must weave our own narrative through the alternative media open to us.

– Changing the mainstream media from within: The dominance and influence of the mainstream media is without question. At GL we have a motto that says, “Don’t get angry, get smart.” Media is a business. Women constitute 52% of the consumers of news, a fact that media barons are slowly waking up to. Gender blindness is just not good business. For example during the Soccer World Cup it was found that advertisers missed the mark when they targeted most if their advertising at men, yet women constituted 40% of those viewing the matches! We know, from our work with 100 media institutions across Southern Africa that have elected to become Centres of Excellence for Gender in the Media that developing gender policies, working with media barons and leaders, training journalists – taking off the gender blinkers – can result in change. We also know that media houses that have chosen to recognise the existence of women in and through the media have reaped the benefits that come with any kind of gender responsiveness.

One of the most promising developments over the last two years is the Global Alliance for Media and Gender (GAMAG) – over 500 organisations around the world – that have come together under the auspices of UNESCO to say that enough is enough. These include major broadcasting associations, media training institutions, journalist unions, women’s media federations, research and advocacy institutions. GAMAG is calling for the SDGs to include a goal on media and ICTs and their gender dimensions. We are also demanding a stand-alone target on gender and the media under goal five – gender equality. And we are demanding that the indicators on freedom of expression in Goal 16 include gender indicators.

Let me leave you with this thought. When a child is born how do we know that child is alive? We wait for the first cry! What is the very next questions we ask: Is it a boy, or is it a girl? Gender, media, voice, communication, these are absolutely intrinsic to who we are. These are not side issues that we can address “by the way” in the run up to 2030. If we are “dismantle patriarchy over the next 15 years”, to quote the Executive Director of UNWOMEN Dr Phumzile Mlambo-Ngcuka, we would do well to bring Section J right to the centre of our debates here in New York.

Colleen Lowe Morna is the Gender Links CEO and Chair of GAMAG. This piece formed part of her statement at a CSW59 session called, “Women and the Media: Advancing Critical Area of Concern J* of the Beijing Declaration and Platform for Action” held   at the UN headquarters yesterday. This article is part of the Gender Links News Service special coverage of CSW59 currently underway at the UN headquarters in New York, bringing you fresh views on everyday news.

Comment on CSW59: Gender, media and communication are intrinsic to who we are! Cancel reply