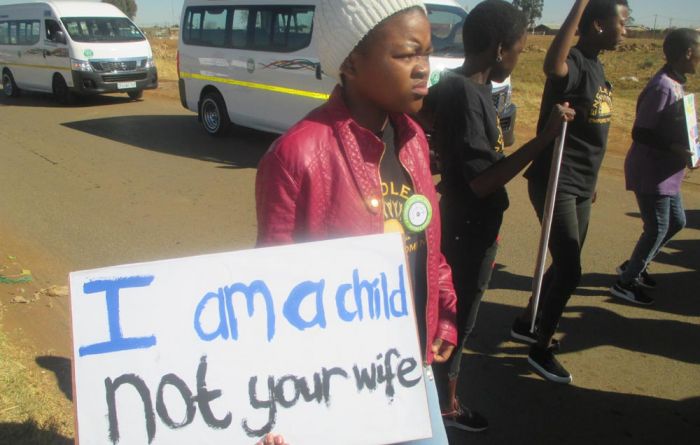 16 Days to name and shame patriarchy

It’s the first day of the Sixteen Days of Activism and I am numb, replaying the story of Priscilla Musonda, and reading her book, “Stolen Childhood”, written in the USA, in semi-exile from her home country Zambia. A fortnight ago Musonda participated in the Zambia Voice and Choice workshop hosted by Women in Law Southern Africa, the national focal network of the Southern Africa Gender Protocol Alliance. She asked to share her story – a lifetime of incest that resulted in four children fathered by her father, two of whom survived.

When the case finally made its way through the tedious legal system to be heard in court, her mother denied that the man, who had been sexually abusing her since age five, was her biological father. He got off, scot free.

Patriarchy doesn’t come more menacing than this: a father repeatedly raping his daughter; a mother defending him: our very own version of Josef Fritzl, the Austrian man who kept his daughter Elisabeth in captivity for 24 years and fathered seven children with her, with the collusion of his wife, Rosemarie.

Picking up on the momentum of the #MeToo campaign that has witnessed a slew of high profile celebrities and politicians speak out on sexual abuse, UN Women has branded the 2018 campaign #HearMeToo, centring stories such as those of Priscilla Musonda, to give a human face to this year’s campaign. Like Celie in Anne Walker’s seminal novel, the Colour Purple (also about incest) Musonda is a survivor – not a victim. From being forced to marry her father, a polygamist with three wives, to running away and finishing her education on the streets, to fleeing into semi-exile, Musonda finally reclaimed her life, marrying Swiss national, Reno Schauferlberger, and starting a home for the abused.

Such endings should not blind us from the horror staring us in the face, and the need in 2018 to go beyond palliative solutions. Listening to first- hand accounts, as President Cyril Ramaphosa did at the GBV Summit on 1-2 November, is necessary to jolt us out of the numbness that comes with GBV being so normalised in our society. The only time Ramaphosa departed from his written text was to acknowledge the pain of the panel before him that included, among others, a case of trafficking; rape and xenophobia, and Martha Libuseng Marumo – a woman jailed for life for killing her abusive partner. But the nub of the matter are these words in the president’s speech: ending GBV “requires that we address societal issues of patriarchy, economic relations and changing the way of thinking about gender relations. Patriarchy means that men feel entitled to exert economic and other forms of power over women. This can lead to situations where women may find themselves tolerating the injustices perpetrated against them simply because they may have inadequate economic or emotional resources to walk away from a dangerous relationship.”

Southern Africans have been exposed to a wealth of struggle literature – the coloniser and the colonised, and colonialism’s particularly brutal variants in this region including apartheid. Now it’s time to wake up to an even more pervasive ideology – as old as Adam and Eve – the belief that men are superior to, and therefore have the right to control women – their bodies, their behaviour, their thoughts. As former constitutional court judge Albie Sachs once said, “the only  truly non- racial institution in South Africa is patriarchy.” Until we name it, shame it, and deal with it, we will win the battle and lose the war against GBV.

One thought on “16 Days to name and shame patriarchy”

Much has been said but more still need to be done to adress the issue of patriarchy. Strategies need to be put to action within communities. The aspect of patriachy needs to be scaled down and understand how boys construct masculinity.

Comment on 16 Days to name and shame patriarchy Cancel reply