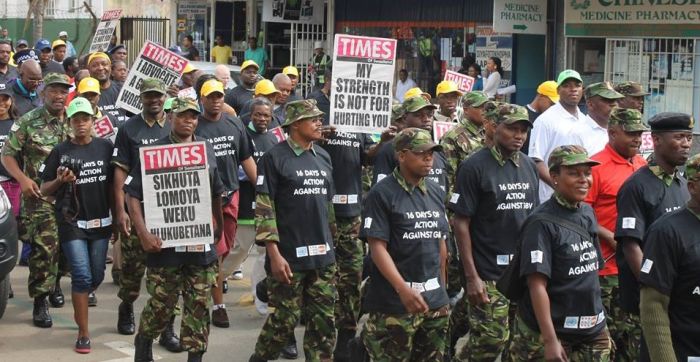 Mbabane, 27 November: ‘Oh my God! He did that to you? Why didn’t you just leave?’ That is the question that everyone asks. I don’t think you can really know until you are in that person’s shoes. I felt I couldn’t leave because I was in love. For the first time, I was with someone who I was totally in love with.

I was divorced when I met him. He had also been married before so we had an instant connection. Within six months of us meeting, we were living together. One night he went out with some friends and didn’t come home. The next morning, when he finally walked through the door, I angrily asked him where he had spent the night. He didn’t even answer me — he just hit me in the face. I was stunned. At the time, I didn’t really grasp what had happened. I locked myself up in the bathroom and cried but quickly rationalized it to myself. He was tired. He didn’t mean it. Later on, he was very apologetic and I swept the incident under the rug. I wasn’t in a great place with my own self-esteem. My ex-husband had been verbally abusive towards me and had torn down my confidence. I felt lucky to have a new boyfriend who was, for the most part, good to me. I didn’t want to lose him over one mistake. Things returned to normal for a while then he hit me again. And then apologized. The abuse followed a pattern: He would be a great partner for a while and then he would blow up and hit me. I always thought each time was the last.

I believed I could love the abuse out of him. I thought if I were a good enough girlfriend — if I just loved him enough — he wouldn’t want to hurt me again. Three years into the relationship, I fell pregnant. He was excited and looked forward to being a father but nothing changed. After our son was born, I thought things would be better but that year turned out to be the worst. He refused to let me visit my parents and friends and I had very little contact with anyone outside his circle. I hid all my problems from my parents because I did not want to appear to be a failure – it’s not easy being a divorcee. Suicide crossed my mind a number of times during this year – I constantly felt worthless and helpless but continued to put on a brave face. I was not even aware that I was going through severe depression.

Just before our son’s first birthday, he came back home and asked me to tell him who the father of our son was because the child did not look like him. He claimed that his sister had pointed that out to him. I was hurt and shocked and before I could answer, he stormed out of the house. I knew that he would beat me again when he returned and I just couldn’t take it – I was tired, confused and afraid. I went to the medicine cabinet and took a handful of sleeping pills and drank them. I then called my mother and told her take care of my son before passing out. I woke up in a hospital bed two days later – confused and shocked. I was upset that I wasn’t dead but this later turned to relief because I loved my son and my family. It took me months to recover and I moved back in with my parents and they helped me raise my son. The man that I thought was my world never visited me in hospital – all I got was a text message demanding to know who our son’s father was. I cut all ties with him and started life anew, for third time. Many people still ask why I didn’t leave sooner but I really can’t explain it someone who has never been in an abusive relationship – they just wouldn’t understand.

This is 28-year-old Noxolo’s narration of what she went through between 2013 and 2017. She has been receiving counselling and has significantly healed from the traumatic experience. Noxolo is one of thousands of women who struggle depression with gender-based violence in Swaziland. Not all their stories have a happy ending. Noxolo was lucky to survive her ordeal but many have not lived to tell their stories.  Dumisani Mamba, the Director of IMERSE – a mental health NGO, says suicide is usually viewed as an option by people suffering from depression because there is an assumption that in death, there is no feeling of worry, pain or frustration. He says in some cases, suicide is often a cry for help as the victims often hope they will be saved before they die but this isn’t always the case.

“Depression has always been there but these days it seems to be on the increase because people are now more socially aware of its effects. It is the leading cause of suicide but fortunately help is there if people do not bottle up their issues. The family is one of the best support structures for someone going through depression as these are people that are usually loved and trusted. There are also external structures including organizations such as SWAGAA and IMERSE that provide care and psychosocial support to the affected person. Such support is critical during the individual’s rehabilitation journey,” he says.

Mamba, who is also a Psychiatric Nurse, says one of the reasons some women stay in abusive relationships is because they are not confident of their self-worth and thus worried about what people will say about them if they walk of out of their relationship.

Gender specialist and activist Sizakele Hlatshwayo says the challenge is no longer that people do not have enough information on abuse as a lot of work has been done to provide information to the public on abuse in all its forms. She says both government and non-governmental organizations have done a lot at community and national level to educate.

“Despite this information, we still live in a largely patriarchal society, where men are viewed as stronger, more competent and smarter. This is rooted at an early age in the different households, where less significant chores are given to girls and girls are also made to wait on boys. These boys grow up believing that women are inferior – they do not view them as partners,” she says.

She notes that although women in abusive relationships know that walking out is the only solution, they often stay in these relationships due to a number of reasons, the first one being economic reasons. She says if an abusive man is a breadwinner, he is likely to get way with his abuse because he is a provider. She says another reason is fear of rejection by family and society, especially if the woman does not have a strong family support structure.

Hlatshwayo says it is the fear of such rejection that often leads to depression and suicide. If suicide is successful, this leads to a whole new cycle of depression by those who are left behind, particularly dependents.

Bongiwe Zwane is a journalist from Swaziland. This article is part of the 16 Days News Service. Photo courtesy of Swagga