News Abortion: SA must speak up... 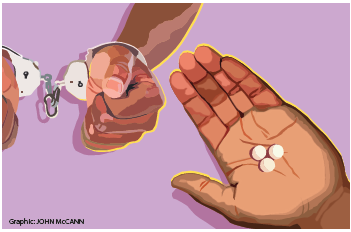 Abortion: SA must speak up

Maseru 28 September: “I woke up this morning and a nurse told me that I have been I a comma since I came in,” says Ntsoaki* from her bed in Lesotho’s only referral hospital.  “I don’t know where I will go when I leave the hospital. I do not have money to pay and I do not have any clothes with me. I was not trying to abort the baby, I was trying to commit suicide using rat poison because my boyfriend did not want the baby and my mother said she could not support us. Unfortunately for me I survived and only my baby died.”

Last week Lesotho Minister of Health Nkaku Kabi announced that the hospital is bursting at the seams with 15 young women admitted each week following abortion complications. According to the World Health Organisation (WHO), 35 out of 1000 pregnancies in Southern Africa end in abortions; one of the highest rates in the world. Almost all of these are backstreet. Abortion is the third highest cause of already high rates of maternal mortality.  Yet, according to WHO, safe abortion is one of the simplest and most effective procedures to administer.

Today is International Safe Abortion Day: a day first proclaimed by NGOs in Latin America and the Caribbean in 1990, but sadly not recognised by the majority of governments. In South Africa, a broad coalition will be marching to demand access to safe abortion with only 7% of the country’s health facilities providing abortions and many health workers refusing to perform the procedure. But South Africa and Mozambique are the only Southern African Development Community (SADC) countries in which abortion is available on demand. Madagascar outlaws abortion under all circumstances.

In the other 13 SADC countries, abortion is only legal in limited circumstances including rape, incest, or danger to the life of the mother or child. In Namibia, which generally has a strong human rights record, the pre-independence Abortion and Sterilization Act 2 of 1975 (still in place) gives as one of the few grounds for abortion “if a woman has been deemed to be an idiot or an imbecile.. which makes sex with her illegal.” Zimbabwe has a policy on post abortion care even though abortion is illegal: a de facto recognition of the reality on the ground.

Explaining why she sought an abortion despite it being illegal in Lesotho, Matumelo*, 23, says: “I already know that the police are going to arrest me as soon as I leave the hospital. The reason I underwent a backstreet abortion using pills I got from a Facebook acquaintance is because when I told my boyfriend of six years that I was pregnant, he told me he does not want the baby as my pregnancy will negatively affect his family. I never knew that he had a wife and children. As such I could not raise a child alone as I am not working.”

Itumeleng*, a 15 year old rape victim, should have been able to have a safe abortion in Lesotho based on her circumstances, but the system failed her. “My case was referred to the children’s court where the magistrate ordered some tests to be done on me,” she recalls. “All the other tests came back negative except for the pregnancy test that indicated that I was six weeks pregnant. The magistrate gave an order for a termination of such pregnancy. At the hospital where I was supposed to be assisted with the abortion as dictated by the Penal Code, I was thrown from pillar to post. At one time I was told the order should not be hand written but typed. When I came back with a typed order I was told the stamp was too vague. When that was corrected, I was told the signature did not seem legitimate. This continued until I was six months pregnant and was no longer eligible for abortion. Today I have to raise a child I did not choose to have. I am raising a child when I am also a child myself. If abortion were legal in Lesotho, I would not have suffered like this.”

Rather than fix the system and change the laws, Lesotho officials are known to surreptitiously advise women to go across the border for safe abortions in South Africa. Few women can afford that; South Africa is not coping; and exporting the problem sidesteps the central issue of the right of women to make choices about their bodies and lives, not only when they are violated, but always. Lesotho, a deeply Catholic country, could learn from the recent referendum on abortion in that most Catholic of countries – Ireland – that resoundingly put rights above religion or morality. South Africa needs to learn that choice without the services to make the choices is a violation of the Constitution. And rather than become a place of refuge for women seeking abortion from the region, South Africa has a duty to speak up and speak out for women’s rights, at home and in the region.

(Colleen Lowe Morna is CEO of Gender Links (GL) and Mabetha Manteboheleng GL Lesotho country manager. Pseudonyms have been used for survivors of abortion to protect their identity. For more information and to sign the safe abortion petition go to https://genderlinks.org.za/what-we-do/sadc-gender-protocol/advocacy/safe-abortion-campaign/).  This article first appeared in the Mail and Guardian

Comment on Abortion: SA must speak up Cancel reply