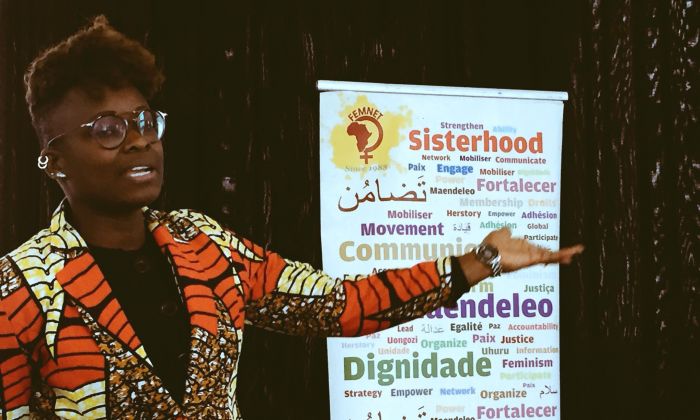 Nairobi, 25th May 2018: The global donor community and international development partners must re-affirm their commitment to gender equality and achievement of the 2030 Agenda for Sustainable Development (SDGs) by dedicating sufficient funding streams towards this focus.

Unless this deliberate and purposeful financing for gender equality and women’s empowerment is realised, all efforts for transformational development, fighting inequalities and bridging the gender gaps in Africa, will be “pointless”.

Africa’s women’s rights and feminist organizations convened in Nairobi this week by the African Women’s Development & Communication Network (FEMNET) are categorical that for the continent to move forward, financing for gender equality must be the main priority.

“There is a simmering crisis on dwindling resourcing for Women’s Rights Organizations (WROs) that must be urgently addressed or the continent will fall short of delivering on its development targets. If our donor community and development partners are really committed to this course then financing and resourcing for gender equality must be the priority” said Memory Kachambwa, FEMNET’s acting Executive Director. “WROs and international co-operating partners recognize that globally, the percentage of Overseas Development Assistance (ODA) that goes to women’s rights organisations has dropped from 1.2% of ODA to a paltry 0.5%[1]. This is a significant drop that has detrimental impact on all efforts towards women’s empowerment and gender equality as a whole”.

Gender Links CEO Colleen Lowe Morna, said like many Southern based WRO GL has reached the conclusion that it is falling between the cracks: “too big for the small funds, and too small for the big funds.”

This, she said, is resulting in a trickle down rather than bubble up effect of ODA targeted at WROs. “I have listened to donors saying they fund issues not institutions. How do you separate the two? How does this square with donor agendas on good governance? To quote AWID, this is a case of ‘watering the leaves and starving the roots’.”

Today, May 25, Africa Day, the organisations are launching the campaign #FundHerAfrica targeted at the donor community, development partners and governments to reiterate their commitment through dedicated, flexible and multi-year funding streams for women’s rights movements, organising and advocacy with a target of 30% of their budgets allotted to women’s rights work.

The released Communiqué outlines critical areas of concern and proposes strategies that can address the underlying issues.

· Practical versus strategic: Many funding models are short term, project-based, crisis focused, at the expense of long term transformative and institutional development. This limits the ability and capacity of WROs to organise and sustain interventions that disrupt systems of power inequalities which require long and sustained funding.

· Limited efforts towards direct funding to local, national and regional actors in the global South without conditions and intermediaries.

· Bilateral funding is increasingly limited to international and inter-governmental agencies and government at both local and national levels leaving a small proportion to civil society organisations yet gender equality and women’s empowerment is very seldom a priority in national plans and budgeting. In addition, there is shrinking political civic space in the region, religious fundamentalism and harmful conservatism evidenced by clawbacks on gender equality and women’s rights.

· There is a growing trend towards Public Private Partnerships (PPP) funding models as a new way of resource mobilization to finance development. However evidence of increased illicit financial flows and a lack of accountability by private sector to women’s rights remains a great concern.

· Private sector, philanthropy funding: While these present interesting new prospects, such funds often lack transparency; are driven by personal and profit-oriented agendas and relationships; and often conflict with the values of WROs.

Despite these challenges, the WROs recognised that the adoption of the African Union Agenda 2063, 2030 Agenda for Sustainable Development, declaration of 2010-2020 as the African Women’s Decade and the AU’s new Gender Equality and Women’s Empowerment (GEWE) strategy present opportunities to scale up actions on gender equality and women’s rights on the continent.

WROs at the same time applaud efforts of Progressive governments and development partners in the global north, support to Women’s funds; Local & Diaspora Philanthropy and best practices of committed support to WROs like the leading from the South Fund created by the government of the Netherlands and managed in Africa by the African Women’s Development Fund; the lowering of the threshold by Amplify Change to enable southern-based WROs to apply; and the creation of the Women Voice and Leadership Fund by Canada.

The WROs call on development partners to:

· Increase, sustain and ensure ear-marked funding to WROs and collectives that is flexible, multi-year and responsive to the different contexts.

· Ensure that this is multi-year funding that includes core support to build strong institutions and movements that can sustain the work on gender equality and women’s rights.

· Promote localization mechanisms that enable funds to go directly to, and be managed by, African WROs and ensure autonomy in setting own agendas.

· Support institutional capacity building: including public relations, finance, marketing, branding of the organisation as a whole.

· Support the processes behind consortium and coalition building and ensure equitable and respectable working relations.

· Ensure inclusive movement building for the involvement of all women and girls in all their diversity.

· Gather data to show the gaps and make the case for funding WROs, including through multi-media documentation of the work that WROs do.

· Scale up and explore new areas of funding, including online, public; private and philanthropy in Africa and the Diaspora, RECs and Intergovernmental agencies.