News Beyond numbers in SA politics... 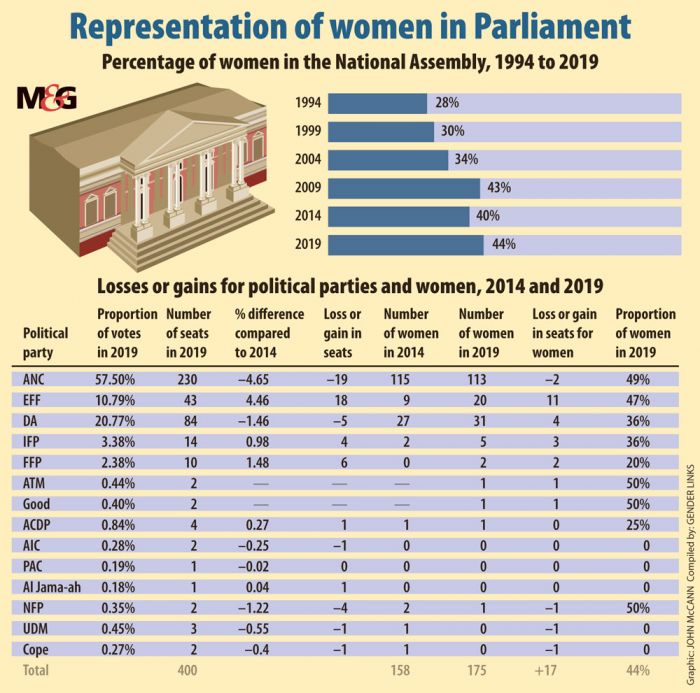 Beyond numbers in SA politics

Johannesburg  17 May 2019: Speaker Baleka Mbete once famously said that South Africa now has a culture of “zero tolerance for no women in politics”. Despite the drop in support for the African National Congress (ANC) which has been the mainstay of steady increases in women’s political participation since 1994, South Africa’s 2019 elections broke new ground in delivering 44% women MPs (four percentage points higher than in 2014), thanks to smaller parties finally pulling their weight. But in the absence of a legislative quota, South Africa still fell short of the 50% target, and remains at tenth place in the global stakes where countries like Rwanda, Cuba and Bolivia have reached or surpassed the parity target.

In the 2019 parliament, the ANC will be down 19 seats, two of these women. The Economic Freedom Fighters (EFF) is up 18 seats; 11 of these women. The Democratic Alliance (DA), Inkatha Freedom Party (IFP) the Freedom Front Plus (FF+) and smaller parties will together bring 11 additional women, while three smaller parties lose one woman each. This brings the net gain to 17, or a total of 175 women out of the 400 seat national assembly, a meteoric rise from the pre-democracy parliament in which women constituted just 2.7% of the total. But what has really changed?

None of the main political parties achieved gender parity in its top five. Casting doubt on the depths of the ANC’s commitment to its voluntary one man, one woman “zebra” quota in its electoral lists, the party found itself in an internal squabble with its Women’s League for appointing only two women out of eight provincial premiers – Sisi Ntombela in the Free State and Refilwe Mtsweni in Mpumalanga. The Northwest premier was still to be announced at the time of going to press. In a bizarre attempt to make amends, the ANC said provinces with male leaders would have 60% women in their executive committees.

The EFF has the most progressive gender provisions including amongst others GBV, sexual harassment, educating men on misogyny and patriarchy and the economic empowerment of women. The party includes comprehensive actions on the rights and protections of LGBTI+ communities. Yet the election witnessed a below-the-belt public spat between EFF leader Julius Malema and journalist Karima Brown.

Brown inadvertently sent a brief regarding an EFF campaign meeting in Ekurhuleni’s Ward six to an EFF WhatsApp group as opposed to her eNCA colleagues. Malema responded by posting Brown’s contact details on Twitter without her consent. EFF supporters attacked Brown on social media allegedly threatening her with rape and made vitriolic racial attacks against her. “We are not playing here. We are dealing with racists… step aside or we will crush your prolapsed vagina,” was one of the comments she received, accompanied by laughing emojis. Another called her an “Indian whore”. Brown lodged a case against Malema in the Gauteng High Court; the outcome is still pending.

The DA has long opposed quotas for women in politics. Its former leader Hellen Zille sparked a heated debate and Equality Court challenge last elections for appointing an all- male cabinet. The message of “zero tolerance for no women in politics” (except the boss!) is gradually sinking. Despite five less seats in the 2019 elections, the DA will have four more women than before. Beneath this veneer and a much improved refection of gender concerns in its manifesto, may questions remain on the DA’s gender politics.

The public feud between DA leader Mmusi Mayimane and Patricia de Lille that led to her resignation as Cape Town’s Mayor and as a member of the DA to form the Good Party did little for the party’s gender credentials. Even in the lead up to the election the DA’s telemarketing campaign included a message about firing De Lille. The Independent Electoral Commission (IEC) ordered the DA to apologise to De Lille and stop the messaging. While De Lille is the come-back kid in the 2019 elections (now one of two women party leaders in the new parliament) the DA’s failure to embrace up and coming black female leaders like Lindiwe Mazibuko is one of the factors being cited for its lacklustre performance in 2019.

The main spotlight in the post-election analysis remains President Cyril Ramaphosa, whose personal popularity helped rescue the ANC from an even bigger slump in popularity. For gender activists, Ramaphosa represents a welcome break to the era of Jacob Zuma, a polygamist and self-confessed philanderer whose presidency witnessed much backlash and backsliding on South Africa’s fragile gender justice gains. Among others, Ramaphosa initiated the first ever presidential summit on gender violence in November last year.

But the president has come under heavy criticism for appointing Bathabile Dhlamini as Minister of Women’s Affairs after her dismal performance as social development minister, and because of her position as head of the ANC Women’s League. Will his personal election boost give him the courage to rise above party politics and make more principled appointments in the soon to be announced cabinet? This is a crucial litmus test for Ramaphosa’s so far timid ventures into feminist politics.

(Colleen Lowe Morna is CEO of, and Kubi Rama advisor to Gender Links. This article was first published in the Mail &Guardian. For more gender and election analysis visit www.genderlinks.org.za)

Comment on Beyond numbers in SA politics Cancel reply