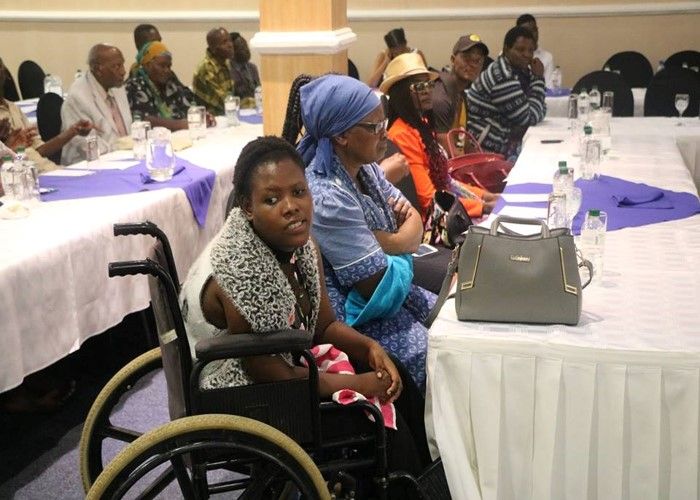 Gaborone, 3 December: People living with disabilities (PLWD) continue to face stigma and neglect, but the disturbing trend of Gender Based Violence (GBV) is compounding their problems in Botswana and the world over.

As the world commemorates International Day of Persons with Disabilities under the theme, “Leadership and participation of persons with disabilities toward an inclusive accessible and sustainable post-Covid 19 world”, people living with disabilities in Botswana say they will take advantage and ensure that their problems take centre stage in addressing GBV.

This has then prompted people living with disabilities to speak with one voice and stand for action. They have called in the first responders such as police, counselors, social workers and health workers to further their education on how to interact, manage cases and live with them.

The ALIGHT Botswana Project carried out between 2017 and 2019 by The Botswana Council of the Disabled (BCD) in partnership with USAID, South African Medical Research Council and Institute of Development Management (IDM) indicates that persons with disabilities are up to 8 times more susceptible to GBV than able bodied persons. There are however very little or no interventions that exist to ease access to assistance for the people living with disabilities when such incidents occur.  The ALIGHT Botswana project aimed to increase participation of women and girls with disabilities in GBV prevention programmes and was implemented in Gaborone, Francistown and Maun.

Agisanyang Pitsane, BCD Public Relations Officer said persons with disabilities are at risk of GBV especially children who are intellectually challenged as they are reported to be five times more susceptible to sexual violence.

“GBV has become diverse more so that it happens in categories of our society, sometimes it happens in the family set up – the most common, some is abuse by the community. The prejudice and unfair treatment is cumbersome because the laws are stagnant in supporting victims of GBV.”

Botswana Council for the Disabled assist by capacitating persons with disabilities and their caregivers on GBV issues in our centers and Kgotlas.

Pitsane further said that there is  still have a long way to go in terms of providing accessibility to malls, offices and public transport amongst other things, adding that education is also a necessity.

“The attitudes especially portrayed by some service providers and members of the public are still concerning. Nevertheless, Botswana Council for the Disabled continues with its awareness campaigns to educate Batswana on the rights of persons with disabilities and their caregivers,” she concluded.

Agisanyang said the law does not favour the community in most instances as they are required to provide proof and identify perpetrators, what they look like and the items of clothing they were wearing. She said this is a hinderance to justice as some of the victims are blind or partially blind or deaf and cannot identify these perpetrators therefore perpetrators do not get convicted. She said mentally intellectually challenged people often face challenges as they are not believed due to their mental state.

“When people are being violated by family members, guardians or people close to the family, some families choose not to involve the law and say the matters will be resolved within the family, hence the continued violence as these still go unresolved. In some instances, the community partakes in these issues of abuse as sometimes people who are intellectually challenged are physically abused and even get stoned by the public, even young children when they see them roaming these streets as some families are negligent and do not assist them,” she added.

Meanwhile, young persons with disabilities have called on  first responders such as police, nurses, counselors and social workers to be thoroughly educated on sensitivity as well as provision of accessible facilities for assisting people with disabilities.

When given the platform to share her experiences with accessing first responders, Keoleboge Khumoetsile (27) from the Botswana Society For The Deaf (BSFTD) shared her ordeal. She said from her growing up, if she were to experience any violence, going to the police would be a challenge because of disability. “Sometimes the people living with disabilities feel lazy to report to the police because they know there will be a communication breakdown and barrier. This will then propel them to continue staying with the perpetrator who continues with the violence because there is no sign language access to where I would report to my best ability. I therefore appeal to the law enforcers across to be at best on models of suitable communication with the disabled persons”, she narrated.

Thabo Baseki (25),  shared that he was born blind however against all odds he managed to further his education. He says that there is a problem of inaccessible information as some form of communications like posters and graphics which do not cater for them. In addition, he said some facilities are not accommodating for persons who have visibility challenges.

“One other issue we face is the issue of mobility because moving from one health care facility to another can be a challenge. We have a problem whereby places where we can access services are inaccessible and do not cater for the blind and people using wheelchairs because some facilities only have stairs,” he added.

Baseki added that when infrastructure is being put in place, there should be a provision of ramps, lights that can assist persons who rely on vision to see what is being presented. Baseki said service providers should do away with stereotypes and should be willing to learn about the basics of addressing persons with disabilities. He further said that there is a bystander effect where first responders tend to keep them waiting longer than they should as they wait for certain persons to assist persons with disabilities.

People living with disabilities are calling for the community and other policy makers to challenge leaders into creating policies that will end GBV and ensure that perpetrators are held accountable and are successfully prosecuted. They further called on implementation of systems that will enable better handling of GBV cases of people living with disabilities. In addition, they call for first responders and groups that assist survivors of GBV to have easy access in their buildings and build capacity of their staff to communicate better with the disabled such as the blind and deaf persons.

Bokani King is a journalist from Botswana. This story is part of the Gender Links News and Feature Service Sixteen Days of Activism news series