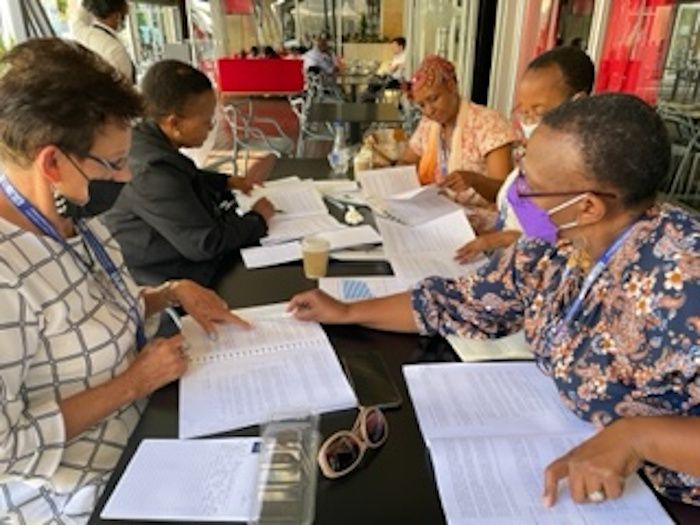 Gaborone, 24 March: Women across political parties are joining forces to make the case that Botswana’s 55 year-old Constitution needs to be reviewed if the country is to deliver on its commitments to gender equality.

In a press statement at the close of a two-day strategy meeting convened by Gender Links, representatives of the Alliance for Progressives, Botswana Congress Party, Botswana Democratic Party, Botswana Patriotic Front and Botswana National Front said the weak provisions for women’s rights in the current constitution are among the most pressing reasons for a review.

“There is no way that Botswana will meet its targets for Sustainable Development Goal 5; the Maputo Protocol or the SADC Protocol on Gender and Development by 2030 if we continue with more of the same,” the drafting task team said.

As Gender Links, with the support of International Idea, has conducted cross-generation academies with serving and aspiring women in politics over the last six months, participants have identified a range of discriminatory practices in the Constitution that Botswana inherited at independence in 1966. These concerns have also been raised at similar gatherings convened by Democracy Works Foundation, a key partner in the strategy meeting.

For example, women have raised concerns about sections of the Constitution that bar citizens born of Batswana mothers and foreign fathers from contesting for the position of President.  Of even greater concern is Section 33 (2b) which stipulates that citizens born out of the country by Motswana mother and a foreign father are disqualified.  This however does not affect those born out of the country to a foreign mother and Motswana man. The women also called for direct election of the president, as this will ensure every Motswana, including women, could contest.

Women’s representation in political office was once again raised as an area of great concern. At 11%, women’s in Parliament, and 18% in Councils, the Academies have all recognised that the First Past the Post system disadvantages women. Women are calling for either a switch to Proportional Representation or a hybrid of both systems, accompanied by Temporary Special Measures to increase women’s representation.

During the strategy meeting, opened by Minister of Environment,  Natural Resources Conservation and Tourism –  Philda Kereng, who is also member of Parliamentary Caucus on women, delegates examined expert evidence from across the globe showing that Constitutions crafted in recent times include a range of progressive measures to help countries attain gender equality targets. According to the UN Guidance Note on “Making and Shaping Constitutions from a Gender Perspective” 100% of Constitutions drafted post 2000 have guarantees of gender equality compared to 56% before 1960.

The delegates dissected the Constitutions of Namibia (1990); South Africa (1996) and the latest Zimbabwe Constitution (2013) demonstrating how the more recent the constitution, the stronger its provisions on gender equality.

The meeting constituted a drafting team with representatives from all political parties; sector and legal specialists to make the case for a Constitutional review to the Commission of Inquiry well ahead of the September deadline. The Commission is currently undertaking consultations around the country and has welcomed inputs from interest groups.

The drafting task team will consult widely with the women’s movement and other key stakeholders on the submission as well as “the Constitution Women Want” once a decision is made on the review.