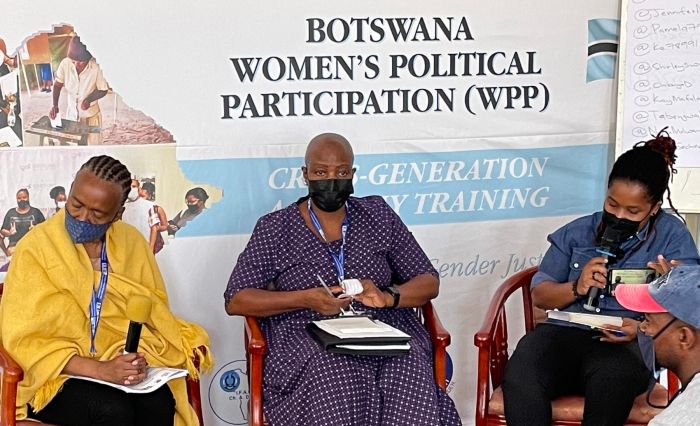 Palapye, 9 November: Women from across the political spectrum are calling on President Mokgweetsi Eric Masisi to appoint an equal number of women and men to the Constitutional Review Commission. They are further calling on him to ensure that the process is inclusive and delivers gender equality.

The President announced in the State of the Nation Address (SONA) on 8 November that he would appoint Commissioners to lead the Constitutional Review, delayed by the COVID-19 pandemic, by mid-December this year.

Women’s Political Participation (WPP) Cross-Generation Academy participants in the Central District commended the recognition in SONA that “gender equality is pivotal to the development of Botswana.” However they underscored that it is time to “walk the talk of gender equality.”

Meeting under the banner of “local action for gender justice” the women from all five of the main parties (BDP, BPF, BCP, BNF and AP) are serving and aspiring councillors and MPs for the 2024 elections.

With just two elections until 2030, the deadline for the Sustainable Development Goals (SDGs), the representation of women in the Botswana parliament has increased by just one percentage point from 10% to 11% in 2019.

Only seven women made it to the Botswana Parliament following the general elections held on 23 October 2019.  Only three women were elected from the 57 seats during the elections. The additional four women out of six seats were appointed and confirmed as Specially Elected Members of Parliament (MPS).Women’s political representation at national level in Botswana is the lowest in the SADC region.

A situation analysis conducted by Gender Links in 2020 found a range of formal and informal barriers to WPP in Botswana, including culture, custom, religion and tradition, lack of support, socialisation, the electoral system and lack of a quota, the media, access to finance and resources and violence against women in politics.

Globally and in the SADC region it has been shown that the Proportional Representation (PR) system is far more conducive to women’s political participation than the FPTP system. Furthermore, there is a direct correlation between the existence of Temporary Special Measures (TSM) to increase women’s political participation and their representation in parliament and local government. Botswana has a FPTP system and no TSM, leaving it at the bottom of the SADC league.

The training included a case study from neighbouring Zimbabwe which has a FPTP system at national and local level. However the 2013 Zimbabwe Constitution added 30% seats for women only distributed among parties on a PR basis. Following a concerted campaign led by the Zimbabwe Women in Local Government Forum with the support of Gender Links, this provision has been extended to the local level for the 2023 elections in that country.

The Constitution Review provides a unique opportunity to find systemic solutions to WPP in Botswana, drawing on best practise in the region. Women meeting in Palapye are calling for the new Constitution to:

The training is being offered by International Idea, in partnership with Gender Links, funded by the Embassy of Sweden in Ethiopia as part of the Enhancing the Inclusion of Women in Political Participation in Africa. The project spans eight African countries: Botswana, Democratic Republic of Congo, Eswatini, Cote d’Ivoire, Kenya, Senegal, Tanzania and Zimbabwe.