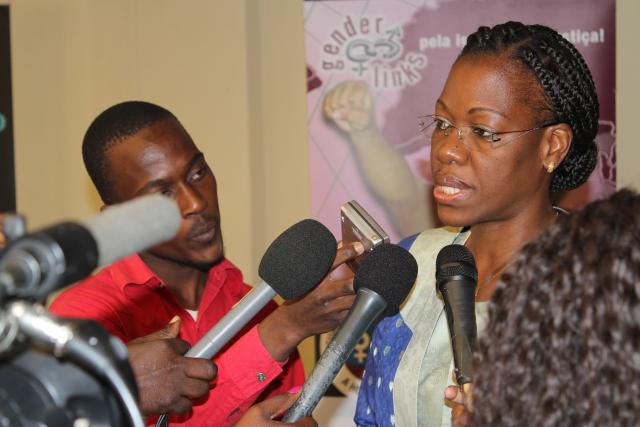 Journeys of change often come to a crossroad. In fact, because change is not a linear process, there may be several times during the journey that a crossroad is reached. After 15 years of focusing on the media in Southern Africa with a gender lens, Gender Links (GL) has the opportunity to reflect on the question ‘which way now’?

In 2015, GL undertook its most extensive Gender and Media Progress Study (GMPS), covering media content, gender in newsrooms, as well as gender in media in media training. Media students in institutions that form part of GL’s Gender in Media Education (GIME) initiative monitored 27,045 news items in 14 countries.  GL released the top line findings of this research on 3 May, World Press Freedom Day 2016.

Over the period 2003 to 2015, women sources in the region have etched up by a mere three percentage points, from 17% to 20%. At 22%, the media houses in GL’s Centres of Excellence (COE) for Gender in the Media performed slightly better than those outside the fold (19%). Still, this is hardly commensurate to the commitment made by these media houses to better practise.

A breakdown by country shows that performance ranges from 28% women news sources in Seychelles to 6% women news sources in DRC. Nine countries are at 20% of above, six below this mark. For seven of these countries this is an improvement compared to 2010. However, Lesotho has slipped backwards, and South Africa – the torch bearer of democracy in the region – has remained virtually stagnant. Overall, Southern Africa is behind the global figure of 24% in the 2015 Global Media Monitoring Project. But even that figure has remained stagnant, compared to the last one day monitoring coordinated by the World Association for Christian Communications every five years in 2010.

On the face of it, the mainstream print and broadcast media across Southern Africa may look no different than they did 15 years ago. The objectification of women as sex objects is still pronounced; women’s voices and perspectives on political, economic and a range of social development issues are still absent and it seems like more and more men analysts of all ages are sprouting from the media’s woodwork; the struggle for gender equality, justice and peace is still not a major news story; and the media continues to practice ‘misrecognition politics’ in the portrayal of feminists, gender activists and their movements.

Alongside this picture of media that appear obstinate in their hold on their own independence, freedom and power, while infringing on the fundamental freedoms and rights of women citizens in Southern Africa, is another image of gender and media research, knowledge, re-training and activism.  The two images have converged in several ways over the last 15 years.

There is now a recognition within the media that the lens of gender put a huge spotlight on media practice, professionalism and ethics. This was done through the pioneering and ground breaking research on gender and the media done by GL and its partner organizations, such as the Media Monitoring Project, the Media Institute of Southern Africa, among others. This research, which focused on editorial content, employment patterns, advertising, media regulations and ethics has contributed to the building of a body of knowledge that did not exist in the region 15 years ago. This body of knowledge also propelled Southern Africans into the global communities of gender and media research as the proprietors of knowledge produced by themselves.

Furthermore, GL in alliance with a host of civil society organizations translated this body of knowledge into activism to empower and inform both the media and the citizens who consume the media. A gender and media movement began to emerge in Southern Africa as media became the focal points of the gender equality and women’s rights movements. And, this growing body of knowledge informed the Article on Media, Information and Communication in the 2008 SADC Protocol on Gender and Development, which holds the media in the region to a benchmark standard of accountability.

The gender and media research also opened the pathways for engagement with the media on the fundamentals of journalism such as “what defines news” and “who tells the stories”. This engagement also got men and women editors to really think about what they do and the journalistic practices that foster discrimination, silencing, and the perpetuation of stereotypes. Media owners began to look more seriously at how to become equal opportunity employers in accordance with labour laws.

Since research worldwide shows that sexism in the media moves from the classroom to the newsroom, a key link in the work to transform the media using gender as the lens of analysis is revisiting both the formal and continuing training of media practitioners. Twenty-five (25) media training institutions in Southern Africa participated in GL’s Gender in Media Education (GIME) research and nine (9) of these have Memorandums of Understanding with GL as GIME Centres of Excellence. Gender and the media is emerging as an area for teaching and research within academic journalism and media studies programmes within Southern Africa.  And, GL has produced and published a myriad of training manuals on how to integrate gender into every aspect of the media’s editorial production. All of this gender research, knowledge, re-training and activism is integral to transforming the media for the future.

15 years on, GL should look at the crossroad as a roundabout which can go in more than one direction.  There are several roads that can be taken by different actors in the gender and media community that GL has built since 2001.

GL in alliance with media NGOs, gender equality and women’s rights groups must now look at how to turn this research into creative and engaging education and outreach programmes that attract the region’s youth. We must link also into the growing feminist activism on ‘voice and power’ which is gaining more and more currency within African feminist spaces, and especially on social media.

Thought must be given to the development of a more robust gender and media activism that calls out and publicizes sexism in the media wherever it occurs. This means taking off the gloves and informing, through social and other media channels, as wide an audience as possible of the media’s violations of women’s freedoms and rights.

Broad-based campaigns that criss-cross every corner within the borders of Southern African nations must be built to create media-watch eyes among all citizens. The media must come to know that while they play the watchdog function looking at those in power, a groundswell of media literate citizens is evolving to watch, check and challenge the media’s position of power and privilege.

Fifteen years is a short span of time in the journey of life and in the life of an organization. GL has a robust and diverse history of work with the media to reflect on, draw lessons from, and to build on as it continues to take actions that contribute to the development of media in the region that are truly democratic in their practices and in their content.

Patricia A. Made is a Gender Links Board Member and  Independent Media Consultant. This blog post is written as part of the GL 15 years of service series.