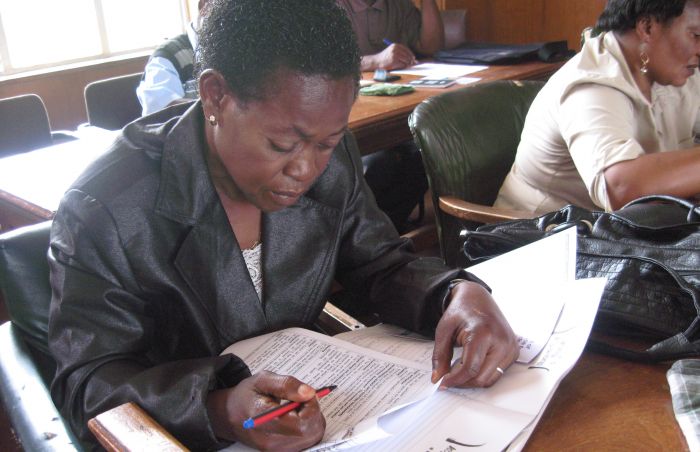 New York, 20 March:  How can national statistical bureau harness citizen generated data for measuring SDG 5 – gender equality? This is one of many questions addressed at side events organised by UN Women at the 62nd Commission on the Status of Women underway in New York. The Southern African Gender Protocol Alliance, that produces an annual Barometer, offered many examples to a high powered panel chaired by Papa Seck, UN Women Policy Specialist, Research and Data.

Now in its tenth year, the Barometer tracks the SADC Protocol on Gender and Development. This unique sub-regional instrument brings together global and continental commitments to gender equality and enhances these through specific targets and timeframes, aligned to the 2030 Sustainable Development Goals. The Alliance is a coalition of NGOs that campaigned for the Protocol and now monitors its implementation.

The Alliance uses two tools. The Citizen Score Card (CSC), highlighted on the UN Women panel as a best practise in citizen generated data, comprises the 40 key provisions of the Protocol. Alliance members administer the score card to thousands of SADC citizens (women and men) every year. They rate their governments performance on a scale of one to ten against these yardsticks. The scores are collated by sector and by country, and compared with scores from the more traditional SADC Gender and Development Index (SGDI), also developed by the Alliance.

The CSC has many advantages. Because it is a perception score, it allows every aspect of the Protocol to be measured even where empirical data is hard to come by (for example in the Constitutional and Legal sector, and on GBV, where data is not reliable). It is a tool for public education and awareness, taking information on an instrument that would otherwise sit in gender ministries to remote rural areas. More importantly, it is a tool for engagement and empowerment. Citizens are not just told about provisions. They are asked how they see these provisions in their daily lives. They are given the opportunity to rate the performance of their governments and their local representatives. This in many parts is a revolutionary idea! It is putting power in the hands of citizens, deepening democracy, raising questions of delivery, enhancing citizen participation.

In some cases the CSC and the SGDI mirror each other. In other cases they differ widely. A good example is education. Because they are readily and widely available, education statistics are used in many gender indices, including the SGDI.  On the face of it, the gender gaps in education in Southern Africa are narrowing. There are now roughly equal numbers of girls and boys in school all the way up to tertiary level. But these numbers tell us little about the quality of education; gender stereotypes, and gender violence in schools. The CSC captures these more nuanced realities, because they form part of citizen perceptions. So year in and year out, the CSC for education is lower than the SGDI.

In 2017, the first post 2015 review, the Barometer amended the SGDI in light of new realities. Prior to this, the SGDI tracked 23 empirical indicators in six sectors. With the advent of the SDGs, there is much more gender disaggregated data being generated. The editors of the Barometer, and its chief statistician Debbie Budlender, decided to drop some indicators in favour of others. For example in education, the Barometer dropped enrolment data in favour of completion rate and indicators measuring the proportion of girls in STEM (science, technology, engineering and mathematics subjects).

The Barometer also introduced new SGDI measures that are an interesting example of Citizen Generated Data incorporated into an empirical index. For example, to measure progress on Constitutional and legal matters, including access to justice, the Barometer developed a Gender Responsive Assessment (GRA) tool for the sector. Peer review groups comprising law associations, justice ministries, women and the law NGOs meet in each country to rate progress. The expert rating is similar to the Mo Ibrahim index for African countries. It produces a score that is subjective but rigorous. This tool provides another avenue for citizen engagement – albeit at the more expert level.

Two other slightly unorthodox but important tools are used in the SGDI in addition to the more traditional data. These are some indicators from the Gender Progress Score (GPS) or Attitude Survey that is administered along with the CSC, and the vast media monitoring data generated in Southern Africa. Five GPS indicators (eg “if a woman is wearing a short skirt she is asking to be raped”) are used as proxy indicators for GBV. Some of these are brought into other sectors, like “hard to measure” areas of the economy – eg care work. Media indicators are excellent proxy indicators for voice. Thus in the governance sector, in addition to measuring women’s representation in various areas of decision-making, the Barometer also measures the percentage women sources in the political topic category, as a proxy indicator for whether women actually have a say in the politics of their country.

All in all, the SGDI now has 36 indicators (compared to the original 23). Twenty of these are the more conventional indicators aligned to the SDGs, and 16 Citizen Generated Scores. Following the adjustments to the SGDI in 2017, the score for the 15 countries of Southern Africa dropped for 68% to 61% – a sign that the test is getting harder. The CSC also dropped, from 69% to 65%; slightly higher than the SGDI but with important sector variations. The Alliance message on the panel? When it comes to gender, national statistics offices need to be willing to get out of the box! A mix of indicators and yardsticks is essential, as the commonly measured variables may only tell half the story!

(Colleen Lowe Morna is CEO of Gender Links and Editor in Chief of the Barometer, now in its tenth year) This article is part of GL News and Blogs service on coverage of CSW 62.