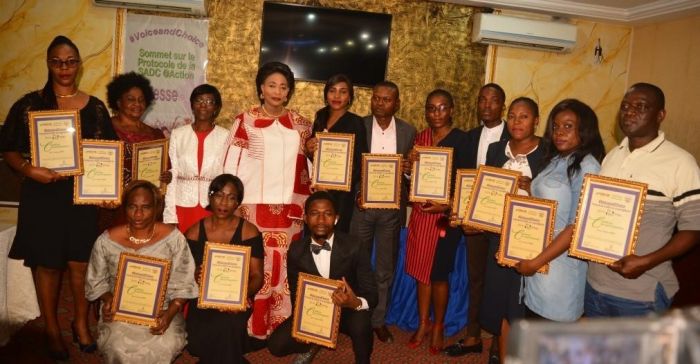 Local Action for a strong 2030 A-gender in Southern Africa!

Democratic Republic of Congo – held the 2019 #Voice and Choice Protocol @ Work Summit and Awards at Africana Palace, Kinshasa. The Summit which was hosted by the SADC Protocol Alliance implementation partner was graciously opened by Gender, Child and Family Minister, Mrs Chantal Safou Lopusa. The Summit was attended by over 98 participants with a total of over 75 entries in the four thematic categories; SRHR Action, SRHR Youth Award, Media and Driver of Change award.

It was held from 18 to 19 July 2019 the SADC Gender Protocol Summit under the theme of “VoiceandChoice” at Africana Palace Hotel in Kinshasa, DRC. 98 people took part in the summit which was opened and closed by the Gender, Child and Family Minister, Mrs Chantal Safou Lopusa. More than 50 entries including 20 from provinces were received in seven different themes.

Ucofem launched the reception of the entries for the participation in the summit on June. Two posters and one video were produced to mobilize people. As the country’s context is marked by the arrival of the new head of state, since January 2019, the challenges remain the improvement of the women participation in the management. A new government is still expected, while President Felix Tshisekedi promises to involve more women.

A total of 57 people from the provinces of Kwilu, Kwanga, Kongo Central, Haut Katanga, Nord Kivu, Kasaï Oriental and Kinshasa presented good practices in different themes. More than 25 young people took part in the summit. They came from media houses, universities and youth organizations. They presented their good practices not only in the youth theme, but also in others such as SRHR, climate change, etc.

Snapshots of the summit highlights with photos from:

There was media coverage on Facebook as well as newspaper articles by journalists covering the summit.

DRC summit was covered by many media: television, radio, print and online media.

Below are some links to the articles:

Other social media coverage during the summit can be accessed here;