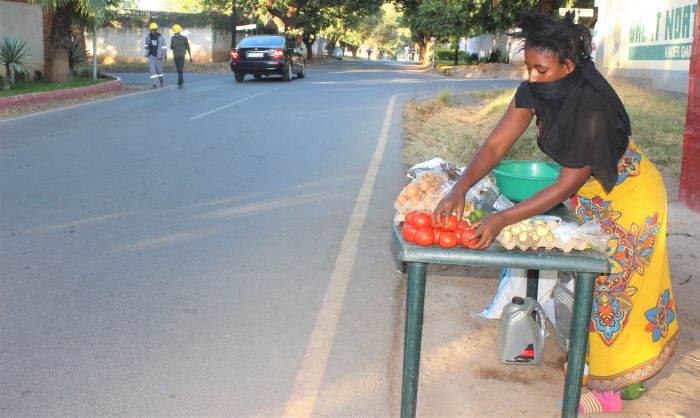 Lusaka, 16 May: Anastasia Sakala is 23 years and is now the breadwinner for her family due to the Corona virus Pandemic.

Married with two kids, one five and the youngest one year, Sakala starts her day as early as 5 pm in the morning. She cleans her house, washes dishes that were used the previous evening for dinner and starts preparing herself by taking a bath and arranging her needs for the day.

She then leaves home to her trading point in one of Lusaka’s upmarket area, Rhodespark, where she spends all her day from.

“I walk most of the time to get here. Unless when I have a little something (money), I jump on a public bus then connect from town with another. As you know, there is no direct bus coming from Chipata Compound to here. But if I don’t have any money, I have no option but to walk,” Sakala narrates.

The fairly light in complexion and medium height mother says she walks a distance of 9 kilometres, to get to her spot just to support her family.

She started business with a meagre one hundred Zambian Kwacha, about US$6. She began with a tray of eggs.

“I started my business with a K100 only. After my husband started working out of Lusaka, he would send us money for food and other things but I thought I should also supplement his efforts and not just waiting upon him for whatever we need home. So one time he sent me a K150, I used a K50. The remaining K100 I bought a tray of eggs and some vegetables and started selling at home,” she recalls.

Later, in 2017 Anastasia discovered the spot where she does her trading from today, Corner of Chingalika and Joseph Mwila Roads.

She thought Rhodespark being an upmarket that had no quick shops for a few low income residents around the area like security guards, domestic workers, gardeners among others including passers-by, they could be her main clientele.

For sure, those have been her clientele ever since and she has had no major hiccups in her business as they have consistently bought from her. She has even established cordial relations with many around and those passing by every day.

But the advent of Covid 19 has hit her. She today feels the impact as many are not buying her merchandise due to various reasons, among them people have stopped moving as much, domestic workers in the area have been sent home as a mitigating factor to fight the pandemic and owners of the houses now do the house chores considering that most of them are working from homes as opposed to offices – hence maids, garden boys among others are not necessarily needed.

For about an hour this journalist sat with Anastasia, only one client came through and bought vinkubala (caterpillar). The dried and deep fried caterpillar packed in a transparent plastic with each pack costing K5, is a popular local delicacy especially among people that haul from the Northern part of the country. Vinkubala is well known snack for its high protein

With regards to Covid 19, she is concerned with places where she most times find herself in such as Soweto Market, Zambia’s biggest market, where she goes to order her merchandize for business.

“Where I go for orders, it is very worrying and dangerous because we are greatly exposed due to lack of social distancing and the place has many people coming from all backgrounds. So, you never know on who could have the virus,” she expressed concern.

She says it has been tough but she has no option but to keep doing what she does to sustain her family and her unemployed husband.

“My husband has been sent home by his employers. He works in the Mine on the Copperbelt but due to Covid 19, he has been home for over two months now. He is no longer working and so I have to do everything home with my little means,” she explains as emotional pain can be seen in her expression.

The husband is among those that are considered as none essential workers that have been put aside by various companies during the Covid 19 period.

Asked what the husband plans now that he is not working, she responds, “he is going round looking for a job. As we speak, he is in Chilenje to check on what he had been promised by some people. He looks around and I pray that he finds something soon so that he can help out.”

Her family lives in a rented small house in Chipata compound where they owe the landlord an arrear of a month. Chipata compound is one of the densely populated areas in Lusaka which houses mostly those struggling financially.

“We have not even paid rentals for the month of April (2020) yet. However, our landlord is understanding and has allowed us to stay on,” Sakala notes.

The sole home supplier says it is tough for her to fend for the family but she just has to do it as they all now depend on her.

“Of course when he was working in the mines I was also doing this business here but when he is no longer working, I know everything lies upon me so I cannot just sit and watch but to work hard. Women should be supportive and understand their husbands in such times. In my case, it is not his wish that he is no longer working so I have to fill in for him,” she affirms.

Anastasia who has chosen to stay put and focused in her business to support her family has bigger dreams and prays that her business grows so she could even has a bigger shop one day.

“I have bigger dreams in life. I pray that I move from selling from this table to owning a proper shelter and later a big shop where I can employ others and sustain my family. Us women are mostly vulnerable but we can achieve it all through hard work. And it is the reason that even under this pandemic, I still stand tall and encourage myself to working hard,” she confidently stamps the closure of our interview.

She however fears that should Covid 19 continue at the rate it is or even having more cases, her trading can be affected and that would have an extreme negative impact on her young family.

Zambia, Africa’s second-largest copper producer with a population of 17 million people ranks among the countries with highest level of inequality globally.  As of 2015, 58% of Zambians earned less than the international poverty line of $1.90 per day (compared to 41% across Sub-Saharan Africa) and three quarters of the poor lived in rural areas.

Its last inflation rate recorded, April 2020, according to the government entity responsible to statistics, the Central Statistical Office, (CSO) is pegged at 15.7 per cent.

Arthur Davis Sikopo is a journalist from Zambia. This story is part of the Gender Links News Service News Gender and COVID -19 news series.