News ESwatini: Engage men in the elimination of GBV... 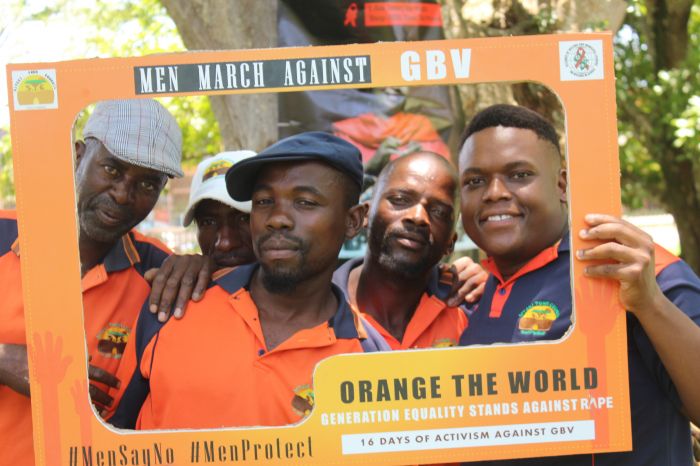 Mbabane, 11 December : “Sita ungamushayi, ungambulali umakwehlula mbuyisele ekhaya” (please don’t beat or kill her, if you had enough or tired of her take her back to her parental home)

On 25 November which was the first day of the 16 Days of Activism, Times of Swaziland published a story  that a man killed his girlfriend  with a brick accusing her of using his money amounting to E400.00 without his permission. Shocking as this may be this is one of the many stories that have been to light of women who suffer violence everyday.

Gender Based Violence (GBV) is a violation that touches all of us and therefore we all have a role to play in ensuring that we eliminate it from our society and engaiging men is a critical point. The Kingdom of Eswatini is known a peaceful country and our people are lauded as being respectful, gentle and kind-hearted. We are also told that our culture does not tolerate violence in any form and that it emphasises protection of the most vulnerable amongst us.

However, this image of peace and these good traditional values are not the picture one gets as we see the violence that is experienced on a daily basis, whether in public spaces, in workplaces, in the privacy of our homes, in schools, in churches, and in many other places where we are supposed to be safe. Worse still, there are those that use culture as an excuse to violate others and force them to keep quiet about the abuse.

The fact that our country has such high rates of GBV is something that is impacting, not just on the individuals affected, but on families, on communities, and on the nation at large. GBV has an overarching impact and leads to vulnerability to health issues, it is also something that affects our economy and well as national development. As the country moves toward first world status, it needs to do so with healthy happy and secure citizens who treat themselves and others with the respect that does not accommodate any form of discrimination or violation. It is therefore a matter of urgency that we eradicate this key impediment to progress.

As civil society organisations our mandate of working directly with communities is well understood. As we serve different communities all over the country, whether in rural, urban or peri-urban areas, we see first-hand the suffering and devastation caused by GBV. We also see that if not addressed, today’s violence can lay the seeds for violence continuing in future generations. In this regard, it is important that we understand that the numbers we see in GBV reports and that we see in the media, in research, in police and organisational reports  are human beings – this is flesh and blood that cries, that bleeds, and that dies as it feels the pain of being abused. It is therefore important that we look at this issue with the due sensitivity that it deserves.

It seems that as a society we are becoming used to GBV happening and are no longer shocked by it but as civil society we do not want to see this behaviour normalized. We have heard the testimonies of survivors and this must surely tell us that we cannot afford to treat GBV as just another thing that happens.

Having said that, as civil society organisations, we acknowledge and appreciate the increasing collaboration we have had with different government ministries and other agencies that deal with issues of abuse and violence. Amongst the key milestones we have achieved together are the passing of legislation such as the Prevention of People Trafficking and People Smuggling (Prohibition) Act, 2009; Child Protection and Welfare Act, 2012 and of course the recently enacted Sexual Offences and Domestic Violence Act of 2018 which we have all been working on for over 10 years. We have also seen the establishment of different units such as DCS and the one-stop centre that provide services and support to GBV survivors.  We are looking forward to strengthened cooperation and we deal with this issue together, because it is through unity in this common purpose that we will succeed.

Recently communities and stakeholders joined an SRHR campaign around Siteki town. The campaign was organised by Siteki Town Council. It is one of the Local Government #Voiceand Choice SRHR Campaigns. In an interview with several men during the dialogue it was discovered that many of them are also GBV survivors but the main challenge is they are too preserved they don’t report their cases to the police under the Domestic and Crime Services department.  On the evaluation of their experiences of GBV in eSwatini, men said it is too high and it is getting worse each year. Both abuse of men and women is on the rise especially violence against women and children. Men raised many concerns on the effects of social media platforms as well as gender relations  and socio economic factors that may be contributing to the increase in violence.

The Post 2015 SADC Protocol on Gender and Development together with the Sustainable Development Goals 2030 requirements, are that all countries should eliminate GBV by at least 50% by 2030.  All countries are given an opportunity of 10 years to eliminate GBV.  ESwatini enacted the Sexual Offences Domestic Violence Act 2018. Government and Civil Society are educating the society on the Act but still people do not understand and they call it a monster because they think it focuses on women and children and yet the Act protects every citizen.   People should attend community meetings and dialogues on the SODV Act to get to know and understand the Act.

GBV can be eliminated when all stakeholders including government, civil society and all sections of the community work together to push for end in GBV by 2030.

Ncane Maziya is the Gender Links Country Manager in Eswatini. This article is part of the GL 16 Days SRHR News Service

Comment on ESwatini: Engage men in the elimination of GBV Cancel reply