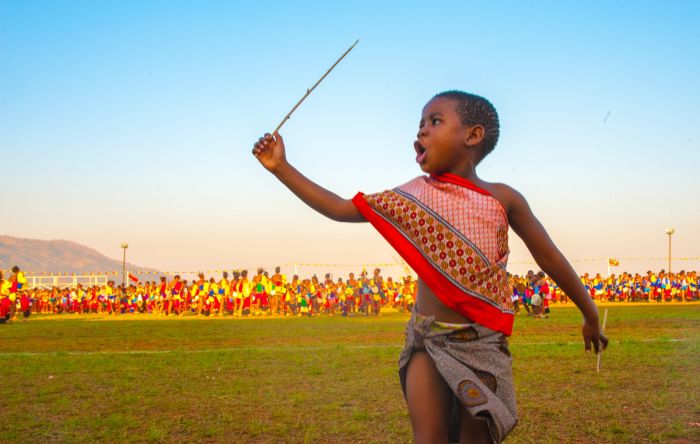 Eswatini: The untold stories of abuse

Mbabane, 13 December: The Kingdom of Eswatini is headed by King Mswati III, the last absolute monarch in Africa and prides itself with cultural festivals and traditional ceremonies that are celebrated religiously. From a distance, it all certainly looks glamorous, especially the renowned Umhlanga-Reed dance festival, which normally is celebrated around August and September each year.

The ceremony is a source of tourist attraction and in many quotas, Umhlanga has been termed a ’boobs-fair,’ where the King is traditionally expected to pick a fiancé or ‘liphovela’  from among the thousands that grace the occasion. Gender and human rights activists rarely ever question the underlying abuse nor do they reflect on the harm that comes upon Emaswati girls under the guise of cultural heritage.

Initially, the ceremony was meant to celebrate purity and the good morality of girls however, many wonder if that is still the case right now. No one wants to put their head on the block to speak of the abuse of young girls disguised as culture. No one dares speak against the ‘deflowering’ of young girls before they turn 18.

In some cases, older Emaswati males purposefully ‘deflower’ girls which results in teenage pregnancies, and exposes young girls to the risk of contracting Sexually Transmitted infections (STIs) and HIV virus.  These girls fall pregnant, and as a result,  in some instances are forced into early marriages or even dumped like disposable lot. Most drop out of school, their futures are destroyed, and dreams shattered.

They join thousands of unemployed youth, with no qualification and desired skills for a formal job. Which leaves these young girls in an extremely vulnerable situation. Locals are afraid to speak against perpetrators of sexual abuse, the exploitation of young maidens and the violations committed against them. It is common for offenders not to face justice and the consequences thereof in Eswatini. These violations are seen as normal and by default or design accepted. There is deep-seated fear and shame associated with sexual abuse when the issues are reported  to the police services.

Law enforcement agencies are proving to be harsh and in the process mishandle sexual abuse violations when they are reported.  There is also negative reaction from families who would rather not bring shame and create enmity within communities. ‘Kubindvwa kubonwa’  is an adage that encourages people not to question wrong but for the sake of maintaining good relationships, should hold their peace. As a result, many girls suffer even within their own families and communities.

The situation is much worse when the sexual violation crimes are reported a long time after they happened. This often fuels the perpetrator’s defense. Questions such as, “if it is true, why wasn’t the case reported immediately, or earlier?” are asked.

Such questions clearly show that there is little understanding of the magnitude and traumatic nature of abuse and its physical, psychological and emotional effects on the survivors.  It is not easy to report such abuses, when one looks at the hurdles to accessing justice they decide that it is “easier” not to report and avoid the hassle.

Not reporting allows abusers to get away with it. However, reporting is a heavy burden to place on a survivor, who already carries the weight of the abuse. That is why, part of addressing gender-based violence and supporting victims or survivors means zero tolerance to abuse by the broader society, and creating a safe environment that promotes reporting.

In this regard, it also means acknowledging that there are circumstances that will prevent a victim from reporting, and if she or he cannot “speak” for themselves for whatever reason, then society has the responsibility to ensure that victims do not suffer in silence.

Eswatini’s failure to address the gender-based violence especially touching on sexual immorality is heavily founded on the long-held acceptance of the hiding family dirty linen from the members of the public otherwise known as “tibi tendlu.” This lifestyle is the unspoken covenant that does not allow “embarrassing” or shameful acts to go public.

Abuse cases are seen as issues that are bound to bring deep fear of and embarrassment upon the affected family.   It is also founded on the desire to pursue and live in harmony and peace with one’s neighbors in case they are held responsible for such a shameful act. It becomes an issue discussed in hush tones within communities and rarely does anyone want to be associated with reporting such a disgraceful acts that have the potential to create long lasting enmity within communities.

Eswatini is a small country and in reality a place where many people are almost related, it therefore becomes difficult to deal with such human rights violations and abuses. In almost every community, people know everyone and as such no one want to apportion blame and potentially destroy community peace.

Emaswati hold in high esteem the tradition of  ensuring that there is peace between neighbors and all things having the potential to bring about enmity and strife between community members is  avoided at all costs. Communities rarely want to be associated with strife and rifts hence the continued reluctance in reporting such abuses and violations.

What makes much worse is  some religious teachings which teach women to protect their families – ‘Babiyile njengelutsango’ and ensure that such abuse and violation cases are kept under wraps as the “wise woman builds her home and does not destroy it”.

In the end,  the religious community does not stand up against such violation and sexual molestation of girls. There is a long way to go before such abuses and violations are thoroughly addressed and uprooted in communities to ensure total safety for young women.

In one rural town, an elderly male continuously abused a young girl for many years. This old male was a distant relative of the family. She was bribed several times not to report such gross sexual molestation and abuse, but as she grew older, she realized that it was wrong. When she wanted to report the crime, she was threatened with death.

Sadly, after many years had elapsed, the young girl became seriously ill and was taken to a clinic for attention. Unfortunately, upon examination,  her private parts were found to be severely damaged. She had contracted sexually transmitted infections.

The case was never reported  and  was swept under the carpet.  The child died because of the many health complications she had. Her family felt it would be wrong to report the case to authorities and risk causing friction in the family.

One wonders how many  young girls go through the same ordeal and their cases are never reported. The law and justice are not given a chance to take their course. Yet another dilemma facing Emaswati girls in their communities.

Emaswati maidens living and growing up in such an abusive environment are doomed, unless a generation arises that does not tolerate such abuse.

Eswatini is well known for its respect for religion and support for so many entities that one would think it is a nation of high morals. Yet some Christian leaders, pastors and bishops protect abusers and molesters of young girls.

It is not uncommon to hear that some church leaders conceal ‘damning’  reports of sexual misconduct and abuse committed by members who are influencers in the church; the cases are treated with kid’s gloves.  Sometimes, after ‘Confessions’ they are called upon to forgive each other as it is expected of members of faith formations. Such an attitude suggests that even within religious communities, abuse issues are taken seriously and reports are suppressed.

Religious entities and churches in particular must set high standards and be active role models in fighting against the abuse of girls. Religious leadership must not stifle reports of abuse and relevant action must be taken. Religious organizations should lead by example and should not allow any abuse to thrive within their jurisdiction.

When Emaswati girls suffer such atrocities and abuse, a groundswell of activism and collective response in more urgent. Human rights defenders and gender activists must collaborate and ensure that intervention strategies are done to fight against this. It should be everyone’s concern that culture and customs are being abused to encourage human rights violations and abuses.

The future of the nation is at stake and holding peace in the name of ‘respect’ cannot be tolerated.  There is need for an all-inclusive activism that will culminate in Emaswati, such continued abuse of our girls is cancerous and needs urgent uprooting.

Losing the battle would be costly, as thousands of girls are exposed and vulnerable. It does not matter who the perpetrators are, the important thing is to fight them vigorously. We all ought to resurrect hope and become champions of change.

Comfort Mabuza is a freelancer from Swaziland. This article is part of the 16 Days News Service #VoiceandChoiceCampaign

Comment on Eswatini: The untold stories of abuse Cancel reply